A woman in Mason County, West Virginia, is devastated after the death of one of her beloved dogs. According to WSAZ News, it was Cheryl Watson’s own son who killed the little dog.

The trouble began on Monday night when Michael Watson came home after drinking – Watson and his mother argued and Watson allegedly went into a fit of rage, throwing things around the home and then turning his anger on one of Cheryl’s small dogs.

Cheryl told WSAZ that she had been hiding her head in fear when she heard a “thump” and her dog’s lifeless body was by her feet. Though Cheryl tried to give the dog CPR, he could not be revived. Cheryl’s son blames the dog’s death on a thrown flower pot, but Cheryl believes that Michael body slammed her dog on the ground. She stated, “I didn’t see anything thrown. I just saw the dog land at my feet. I picked him up and he was deceased. I put his snout in my mouth and tried to resuscitate him.”

Watson was booked into the Western Regional Jail on a charge of animal cruelty.

Dog trapped in barn rescued – and then 35 pounds (yes pounds) of fur is shaved from his body. Read more here. 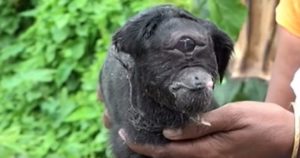 How many people ignored this dog’s suffering and walked on by?

Blind and deaf senior dog abandoned on side of road in Ware, Massachusetts
Scroll to top