This week, a Great Dane was saved from an ice-covered lake in Pennsylvania. The rescue effort was documented by Volant Volunteer Fire Department on Thursday. In a Facebook post, the dog’s rescue was recounted to page followers:

This morning at approximately 10:15 Volant VFC was dispatched for a Great Dane that had broken through the ice on a pond about 20 feet from shore and assistance was requested from Neshannock Township Fire Department for their water rescue team.

Rescuers utilized a boat and personal flotation devices to enter the icy lake – the struggling dog was secured with a dog and lifted onto solid ice before being loaded into the boat and pulled to shore. The Department stated:

Noga Ambulance on scene evaluated the owner who had been laying on top of the ice holding onto the dog until fire company personnel reached them. Once the dog was on shore he was put into a stokes basket and carried to the roadway approximately 100 yards where he was loaded into a vehicle to be taken home and warmed up and evaluated. 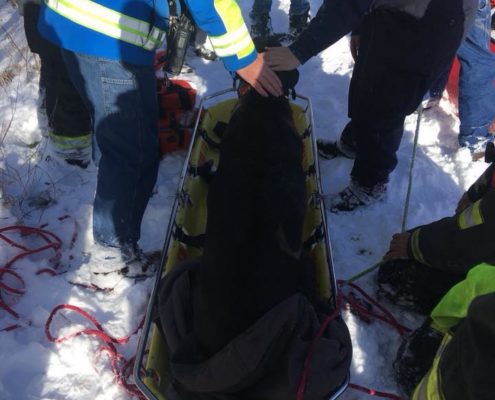 It bears repeating – dogs should be kept on leash around icy lakes and ponds (and rivers). If a dog manages to run onto thin ice and fall through, emergency personnel should be contacted for assistance.

Recently in the news: Man who threw dog into traffic sentenced to probation

Senior dog impaled after falling into manhole
Scroll to top