Thousands of people have been following the heartbreaking story of Bobo, a senior pit bull who belonged to a homeless woman in Riverside, California. Bobo was discovered with a grotesquely swollen face which appeared to be the result of long-untreated cancer.

On Friday, the Facebook page, Maria Sanchez and the pups of SBC Shelter (Save the Squishies) , reported that Bobo had been found and rushed to an emergency veterinarian for an evaluation and possible treatment. Several hours ago, Sanchez updated worried followers about the ailing dog…her first words hinted at the final good-bye:

Everything that has happened these past few days has been extremely emotional, from the first moment I set eyes on Bobo 2 days ago to today where I laid with him on the vet floor as he struggled to take his final breath.

Bobo was evaluated by three specialists – the findings are heartbreaking:

They said he should have been let go months ago before the cancer became so invasive to the point that it began to invade his eyes sockets, damaging the orbits and causing him to squint in pain, his nostrils, soft and hard palate had been invaded with cancer. The enormous mass swelling caused his bones to break, and made it almost impossible for him to breath.

It is believed that Bobo had been suffering with the untreated, aggressive cancer for over a year – his prior owner claimed that the dog was not in pain. The woman’s presumption in stark contrast to the findings of the veterinarians who determined that Bobo was in a great deal of pain and that he could not be helped.

Sanchez tried to get Bobo’s owner to come to the veterinary hospital to say her final good-byes, but she was unable to reach her. Later, Sanchez learned that the woman, and a friend, had allegedly vandalized and stolen things from the hotel where she had been staying. Sanchez wrote:

I received a phone call from the hotel that we set up for Bobo’s owner. She just notified me that Bobo’s owner Darci and her friend Laura stole their coffee maker, their refrigerator, they tried stealing the TV but could not get it off the wall. But they shattered the screen in the process. They broke lamps and they cut the phone cord. She said that the room was a non-smoking room, yet it smelled like cigarettes and marijuana.

Sanchez addressed concerns that Bobo was humanely euthanized against the wishes of his owner:

Bobo was transported by pet ambulance back to Riverside, we made one last attempt to beg them to come and be with him at this important time and they refused. Bobo crossed the bridge at 8 pm this evening at the request of animal control.

Read the detailed recount of what transpired at this link to Sanchez’s Facebook page, Save the Squishies.

Comments about this situation are welcome below.

Meet Duke – a dog who was found on a discarded couch. 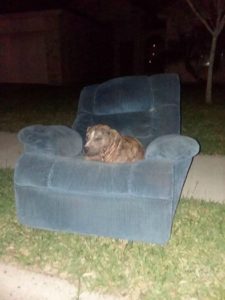 Couch dog: Starving bait dog languished in rain and cold and no one stopped...

Woman who claimed to rescue dogs arrested – dozens of animals found in...
Scroll to top