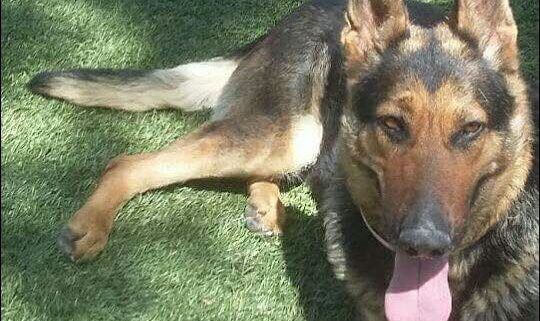 A beautiful German shepherd, named “Iris,” was betrayed when she was pulled from an animal shelter in Castaic, California, by a “rescuer” who turned around and dumped her back at the same facility a short time later.

The seven-year-old German shepherd, betrayed by the person who was supposed to save her life, was in jeopardy when she was taken back to the facility because she was now slapped with the label of “rescue only” thanks to whatever her “rescuer” told shelter staff. After Iris was returned, efforts to save her life began in earnest on social media.

The following plea was made for Iris to be spared:

Imagine you are are Iris for a minute. You end up at the Shelter, a rescue pulls you and takes you to their place, you don’t get along with one of their dogs on the property and that so-called rescue dumps you back at the shelter. Well this happened to poor Iris. Iris has a limited time left, and needs either an adopter or REPUTABLE and committed rescue to save her.

Thanks to the German Shepherd Rescue of Orange County, Iris will be saved. On Saturday, the abandoned dog will be pulled to safety and taken under the wing of the non-profit organization. Director Maria Dales told the Pet Rescue Report, ” we couldn’t leave her there to die.”

The rescue agency is looking for a foster home, or an adopter, for Iris. Learn more about how you can help at this link.

As for the initial “rescue” group which pulled Iris – the animal shelter will not release their name. Iris was betrayed by the group that had committed to help her – dumping her back at the shelter just days after she was pulled and indicating that she had behavioral issues was a virtual death sentence. If not for German Shepherd Rescue of Orange County, Iris would be dead.

Dog trapped in barn rescued – and then 35 pounds (yes pounds) of fur is shaved from his body. Read more here.

Public outrage at treatment of bear cub video leads to investigation of Indiana...
Scroll to top