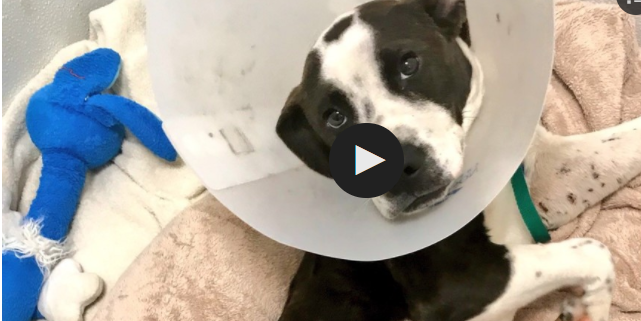 An animal cruelty investigation has been instigated for a dog whose leg had to be amputated from a badly infected gunshot wound. According to the Charleston Animal Society, a dog dubbed Lil Buck, was discovered with buck or birdshot wounds on his front and back legs and body.

On Tuesday, the animal shelter wrote:

Life is hard when you live on the streets and humans decide to shoot at you! “Lil Buck” came into the Shelter with a horribly infected gunshot wound.

Lil Buck was found long enough after after he was shot that the infection was severe enough to require that his back leg be amputated. The Charleston County Sheriff’s Office is investigating the situation as a case of animal cruelty. The shelter stated:

Aldwin Roman, Anti-Cruelty and Outreach Director for Charleston Animal Society wants the public to know that we will not tolerate such blatant abuse and we will assist Charleston County Sheriffs Office in every way we can to prosecute the person who would do such a thing to a defenseless animal.

Lil Buck is going to recover from his amputation and injuries at a foster home. When he is finally healthy enough, he will be made available for adoption.

Donations for this injured dog’s veterinary expenses can be made here.

Interested in following only heartwarming stories? Please follow the Positive Pet Rescue Report Facebook page
Continue reading: Men in viral shark dragging video are facing criminal charges
Recently in the news: Owner surrendered hunting dog with massive tumor
Did you know that if you want to get updates from a Facebook page, you have to do more than just “like” it? To get recent postings in your Facebook feed, you must also hover your mouse over the word “following” and then click “see first” from the drop-down menu. You may want to check back with your favorite pages on occasion because Facebook often changes your settings, no longer having your favorites among those to “see first.”