You are here: Home1 / News2 / animal cruelty3 / Devastating news about puppy found with tongue cut out 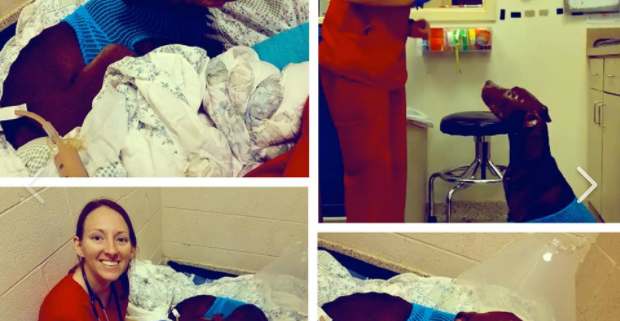 On Tuesday, devastating news was shared about the 18-month-old puppy who was recently discovered with his tongue cut out in South Carolina. In a Facebook post, Noah’s Arks Rescue broke the news about Briggs to followers:

Beautiful Briggs has crossed over The Rainbow Bridge. He got well enough to get out of the hospital and come to our Rehab Facility. He had learned to eat meatballs but was having a difficult time drinking water. We had to give him water through his PEG tube which was working great. He was happy, and his weight was remaining the same. This morning, he did not feel well and threw up all of his food from the previous day.

Though the pup was rushed to the Charleston Veterinary Referral Center, it was determined that he was septic and the infection from his mouth was in his bloodstream.

We did Life-Saving measures to get him stable, and when his body would not respond, I knew it was time to say good-bye to dear Briggs. Each of us are devastated by the loss of Briggs. We never saw this coming and knew he would overcome this. Briggs knew how much we Loved him. His Life was never about publicity or attention. It was about saving this beautiful boy and giving him back his Life.

Briggs had been found on November 19 in York, in the area of Madison Street and Lowry Row. He was injured and had been left tied to a fence – it is believed that he was used for dog-fighting. York officials are investigating this case of animal cruelty. Anyone with information about dog fighting or knows anything about the past history of this dog, whose name was Kemba at the time, is asked to contact the York County Sheriff’s Department at 803.628.3059.

Prior article about Briggs here.

Interested in following only heartwarming stories? Please follow the Positive Pet Rescue Report Facebook page
Continue reading: Men in viral shark dragging video are facing criminal charges
Recently in the news: Owner surrendered hunting dog with massive tumor
Did you know that if you want to get updates from a Facebook page, you have to do more than just “like” it? To get recent postings in your Facebook feed, you must also hover your mouse over the word “following” and then click “see first” from the drop-down menu. You may want to check back with your favorite pages on occasion because Facebook often changes your settings, no longer having your favorites among those to “see first.”