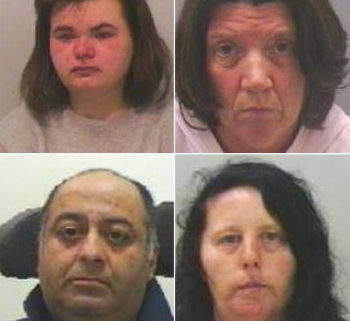 A tortured man died after a cruel gang in the United Kingdom forced him to cut off one of his own testicles and have sex with a dog, reported the New York Post. The victim, identified as 45-year-old Jimmy Prout, died after ongoing torture by people that he had considered to be his friends.

Two people, 26-year-old Ann Corbett and 43-year-old Zahid Zaman, were convicted of murder – 50-year-old Myra Wood and 56-year-old Kay Rayworth were found guilty of causing or allowing the death of a vulnerable adult.

Prout was subjected to unimaginable cruelty and pain before he finally died – according to Prosecutor Paul Greaney, at one point, Prout’s “scrotum was sliced open and his testicle was removed; he was then forced to eat it.” As reported in The Mirror, Prout’s sadistic torture was extreme and ongoing – the judge stated “He had a tattoo on the back of his neck scratched out, his teeth were chiselled out, he was forced to submit to dogs trying to penetrate him, he had a testicle removed and it was put in boiling water and he was made to eat it.”

Prout finally died and his abusers dumped his body in a “wasteland,” where it was partially consumed by wild animals.

Sentencing for the four individuals involved in this cruel case is scheduled to take place on June 27.