A beloved family dog, who her owner referred to as the “heart of the family,” was killed in a cruel act of violence over the weekend. According to Sunday’s WJTV News, on Saturday, someone broke into a Vicksburg, Mississippi, home and killed the family’s senior dog.

Robert Sanders told WJTV News that he believes his dog was defending her home when the burglar(s) shot her multiple times – he said, “they had literally shot our dog, the dog was shot three times, twice in the leg and one in the head.”

Several items were taken from the ransacked home, but nothing as important as the life of the dog who had been a part of the Sanders family for the past eight years.

The local authorities are hoping that someone can provide a tip to lead them to the person(s) responsible for this cruel crime.Anyone with any information to contact Crime Stoppers at 601-355-TIPS(8477). Tips can also be phoned to investigations at 601-636-1761.

Abandoned senior dog clings to volunteer for love – read how you can help him escape death here. 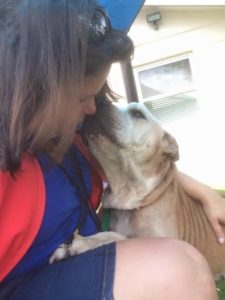