You are here: Home1 / News2 / animal cruelty3 / Woman who tried to help ailing cow is now being intimidated

Update: The sign has been removed and Amanda has received an apology from animal control.

The “good ole boy” network is alive and well in in Lillington, North Carolina. Last week, a woman made a call to animal control after seeing a cow who was missing an eye and suffering from an infection which had left half of her face, “rotting.”

The good Samaritan called Harnett County Animal Control program manager, Steve Berube, to voice her concern that the cow was suffering – her first attempt was met with disregard. ACO Berube simply stated that the cow’s eye was being treated by a veterinarian (despite the eye actually being gone).

An article was published about the concerning situation on November 2. After multiple calls and emails were sent to Steve Berube, further action was taken – in fact, in just one hour, Berube stated that the cow would be euthanized by a veterinarian. Unfortunately, Berube tried to pin the blame on those who expressed concern for the cow’s suffering…rather than on the farmer who allowed the cow’s eye to rot out of its socket. Berube emailed those who were concerned about the cow’s condition and he stated, “because of increasing public outcry the owner of the cow euthanized the animal as was his right as property owner.”

Now, the woman who took the time to take photos of the suffering cow, and reached out to the local animal control to investigate the situation, is being intimidated by the farmer who neglected the cow. Today, the woman, whose name is Amanda, has her personal information on a huge red sign that the farmer has put up in his field. The sign has Amanda’s personal cell phone number, a description of the vehicle she drives and her address, and it warns other farmers in the area to “beware” of her because she will bring them “nothing but trouble.”

The woman’s efforts to get the local sheriff involved are falling flat – she told the Pet Rescue Report that she was told that her information is “public” so the farmer has the right to to post it to anyone and everyone in the area. It would seem that the only way that the farmer could have received Amanda’s personal information is from the Harnett County Animal Control agency where she initially voiced her concerns….Amanda is renting a home, so there are no public tax records with her name and her cell phone number is from Washington State (her husband is in the military and she still has her Washington phone number).

Amanda told the Pet Rescue Report about the fear her three children have over being followed home and frightened by strangers in her town – she stated, “they are beyond scared but what I keep telling them is that is what he wants you to feel. He wants you to be intimidated for doing the right thing.”

Steve Berube has been in trouble for his animal control investigations in the past – beyond criticizing individuals who are concerned about a cow’s suffering, and apparently releasing a good Samaritan’s private information, he has been called out for abruptly halting an animal cruelty investigation.

According to The Daily Record, Berube is accused of blocking certain animal cruelty investigations because of “personal” friendships – Berube denies the allegations against him. (Read the full article about these allegations here).

Amanda spoke up and did what a good person is supposed to do – she saw an animal suffering and she followed up with the local animal control. In return, she and her three children are now being stalked and intimidated and all of her personal information is on a sign in the field of the farmer whose cow was in such pitiful condition that her face was rotting and her eye was gone. 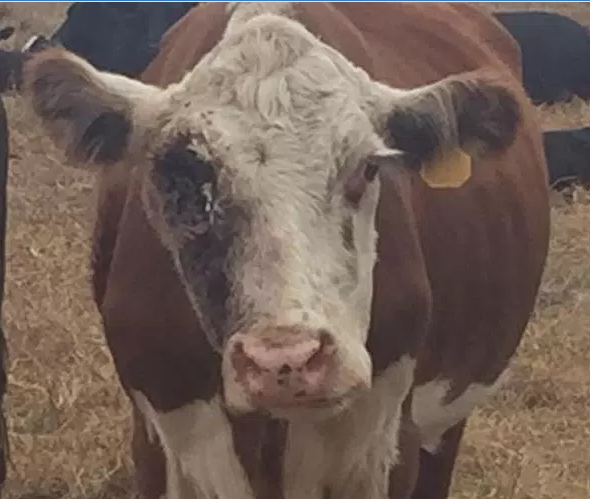 On Monday, she told the Pet Rescue Report about what is happening to her, ” I have people driving past my house and I waiting for something like my dogs to be poisoned, tires slashed, or something worse.”

Amanda is an animal lover – she has worked in veterinary medicine and fostered homeless dogs. She is the first to adopt the old, the sick, the unwanted. She is a good person, who did a good thing, and now she is being vilified by locals for her her actions.

Speak up for those who are doing good and call out those who have over-stepped their bounds.

Find a list of local officials to this town here.

Of Note: The Pet Rescue Report had the farmer’s information (address and phone number) from the writing of the first article. So as not to encourage any “vigilante” behavior, that information, which is “of public record” was not published. The same can not be said of the farmer who is now intimidating Amanda.