You are here: Home1 / News2 / Dogs3 / ‘Wildlife lovers’ exchange pythons on wedding day instead of... 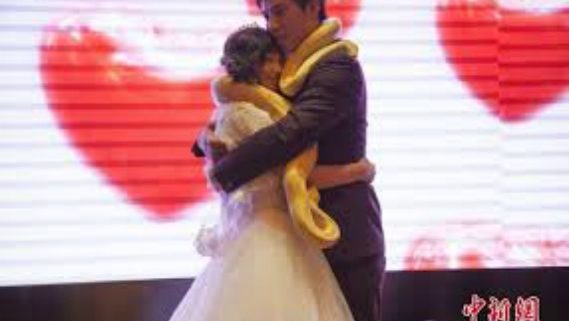 A Chinese couple claiming they are “animal lovers” exchanged two giant gold pythons at their wedding ceremony in China on Friday, reports the ShanghaiistNews.

The wedding, performed at a hotel in the Jilin province of northeast China on September 16th, was bizarre – to say the least, as two pythons weighing 33 pounds and 66 pounds respectively became the souvenirs of their love for each other in lieu of the more traditional marriage rings. The bride, Jiang Xue presents her groom with the smaller snake and once the two “exchanged” snakes, they hugged. (snakes too!) 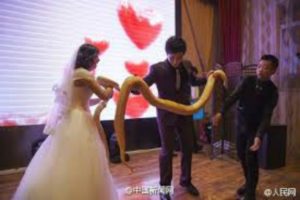 The 24 second video was posted online the next day and shows the groom, Wu Jianfeng, facing the bride with the snake around his neck. Then another reptile is pulled out of a cabinet and the bride wraps that one around her neck. The couple claim they did this to promote wildlife conservation and keep the snakes as pets in addition to spiders, lizards and birds they collect.

The rare species of python is reportedly an albino mutant of the Burmese python; citizens are not allowed to keep wild animals as pets. Two days later, after the video went viral, the forestry department seized the two pythons who are now at a local wild life rescue sanctuary.