Seven horses have died since the opening of the Del Mar Racetrack in just the first week; prompting concerns again over the safety and risks of thoroughbred racing, reports the Paulick Report. 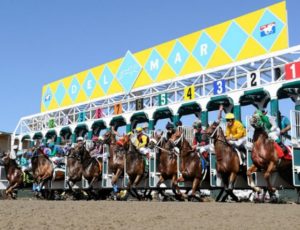 On Saturday, three horses suffered injuries, prompting Beholder’s trainer, Richard Mandella to postpone the horse’s training session until Sunday. According to the San Diego Union Tribune, in a day that promised lots of admiration and buzz  for California Chrome in the San Diego Handicap, the experience turned out to be a time of sadness and tears. Of the three horses hurt, one had to be euthanized and another horse lost his life during a race in front of more than 20,000 spectators. Thoroughbreds Whiskey and Wine were euthanized and later Dutchessa broke down at the finish of the second race in clear view of the grandstand – as many young children watched the heartbreaking scene.

As to the causes of the injuries and deaths, Jeff Mullins, trainer of  Whiskey and Wine, stated some of his riders questioned the inconsistencies on the dirt surface. Other riders did not report any concerns.  According to Dr. Rick Arthur, equine director for both the state board and UC Davis School of Veterinary Medicine,  the causes won’t be known for sure until necropsy reports come back.

“I’ll tell you, three breakdowns in (10) minutes, that won’t happen again for years,” Arthur said. “It’s too early to have any idea whether it’s an issue or not. It’s too early to take a position on whether there’s a problem. You do have statistical anomalies.”

Ellen Erickson and other animal protection advocates were at the track this weekend deeply concerned about animal cruelty calling horse racing legalized gambling with horses as the real victims, although track owners say they do everything they can to maintain the safety of the track and provide constant veterinarian care.

“It’s our everyday nightmare,” stated Joe Harper, Del Mar’s president and CEO. “We’re all in this business because we love horses. It affects us.”

Racing fans as well as race horse owners weighed in on the Paulick Report with their opinions. Most agree that the number of incidents in one week deserves more investigation or perhaps a more sincere response than “we love horses.”

I own race horses and love the sport but I am sorry….7 fatal breakdowns in one week is outrageous, unconscionable and unacceptable. There weren’t just 7 “bad steps”! People SHOULD be protesting! Harper is just giving the usual party line. When Mandella postpones a workout for his star, he’s telling you. Trainers are loath to criticize management for a multitude of obvious reasons. Unless and until this issue (industry wide) is dealt with, the protests will, justifiably, increase. Del Mar better figure it out (and quickly)!”

Rest in peace innocent horses; you did your jobs well. Tragically you were disappointed by humans again.