You are here: Home1 / News2 / animal cruelty3 / Pet pig adopted from Craigslist and then tortured
Spread the love
Tweet 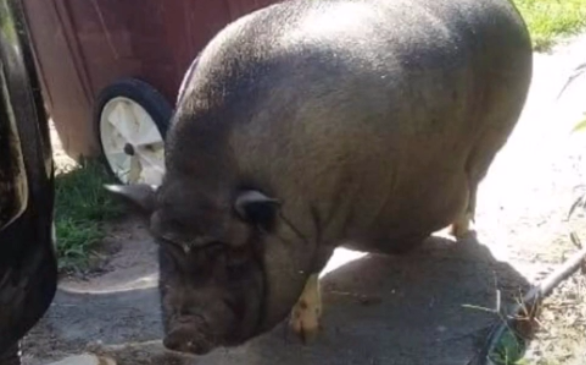 Someone re-homed their pet pig on Craigslist and the animal wound up with a Georgia woman who wanted the pig slaughtered for food. According to Friday’s publication of the Miami Herald, the pig did not die quickly…but was instead, tortured by the people who were asked to put her down.

The disturbing scene played out on Wednesday afternoon in a Bibb County, Georgia neighborhood. The pig’s new owner, Gertha Atis, allegedly asked 62-year-old Freddie Phelps Sr. to kill the pig, but he failed to accomplish the task quickly, or humanely.

Brian Walls, who was in the area working on a home, described what he saw to the Miami Herald:

“It was one of the most disgusting things I’ve ever witnessed before. It was a horrible thing that happened.” Walls saw the pig get shot, but the animal did not die. The torture continued, “They were beating the pig, hitting it in the face and it was squealing. They weren’t hitting it hard enough to kill it. They were mainly just torturing the thing, and the thing had to be in horrible pain.”

The pig was not only shot and beat, but also, struck in the back with a pickaxe – by the time that the authorities arrived, the pig had been grievously wounded for quite some time. At the request of Macon-Bibb Animal Welfare Director Adams, a sheriff’s deputy shot and killed the wounded pig to end its suffering.
According to the Bibb County Sheriff’s Office, Phelps was placed under arrest and charged with aggravated cruelty to animals. He was transported to the Bibb County Law Enforcement Center where he remains until bond is set by a judge. The pig was taken to Animal Welfare to have a necropsy performed.
This incident continues to be under investigation. Anyone with information in reference to this incident is urged to contact the Bibb County Sheriff’s Office at 478-751 -7500.
(screenshot via Miami Herald)
https://petrescuereport.com/wp-content/uploads/PRR-Logo3b-300x38-1.png 0 0 Penny Eims https://petrescuereport.com/wp-content/uploads/PRR-Logo3b-300x38-1.png Penny Eims2016-08-26 23:00:402016-08-26 23:00:40Pet pig adopted from Craigslist and then tortured
17 replies