You are here: Home1 / News2 / Dogs3 / dog abuse4 / No jail time for woman who left dog to die after dumping him at closed...
Spread the love
Tweet

In Portland, Maine, the woman who callously abandoned her dog outside of a closed animal shelter in the freezing cold in January pleaded guilty to animal cruelty on Monday, reports the Portland Press Herald. 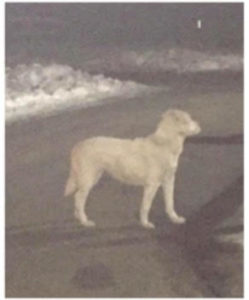 Sarah Vye received a 90-day suspended jail sentence with one year of probation. In addition she is not allowed to own a pet in the future and will be subjected to random checks. She must also pay a $500 fine.

Video surveillance cameras showed  Vye pulling the dog out of her van in the parking lot of the Androscoggin Humane Society and then leaving the yellow Labrador retriever alone. Authorities struggled to find the dog; three days later he was found, but had been hit and killed by a car. The video garnered more than a million views on social media. 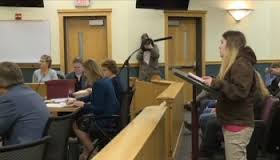 According to the Androscoggin County District Attorney’s Office, Vye originally pleaded not guilty, but changed her plea to guilty of one count of animal cruelty on Monday. The woman told authorities the dog named Abby had belonged to her ex-boyfriend’s  ex-wife, and the dog had been aggressive to her young children.

As you many of you know, our staff and volunteers have been actively searching for this dog that was abandoned outside of our facility on Monday evening. Unfortunately during our morning search the dog was found hit by a car near the off ramp of the bridge. A sad morning here at GAHS with the passing of this dog, but we are determined to figure out who dropped this dog off at our facility. If you have any leads, please contact Animal Control through the police department. Thank you to our staff, volunteers and members of the public who helped us try to bring this dog back to safety. You are all greatly appreciated.