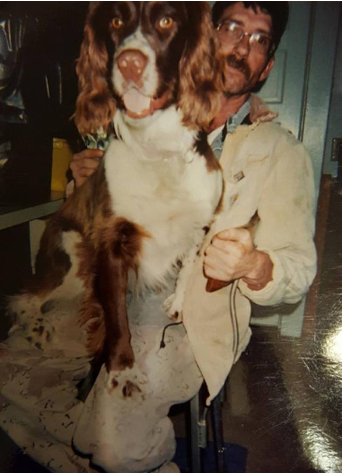 According to Thursday’s publication of the Tri-City Herald, a jury has awarded what may be the largest settlement of its kind to a Franklin County, Washington, man whose dog was fatally shot by his neighbors.  The notable settlement was made to 56-year-old James Anderson for the death of his seven-year-old English Springer Spaniel, “Chucky.”

Chucky, a well-trained hunting dog, who also knew a multitude of tricks, including climbing ladders and riding motorcycles, was shot to death on March 9, 2014, by the Hayles family, who had been trapshooting. The family, Scott and Lori Hayles and three sons, are accused of shooting Chucky and then hiding the cruel deed.

According to a prior publication of the Tri-City Herald, Anderson and Chucky were inseparable and he considered the spaniel to be “his son.”

The jury awarded Anderson $36,475  on August 3 – Adam Karp, a well-known animal law attorney, represented Anderson in the trial. Anderson expressed his gratitude for the jurors’ decision, “I don’t even have words in my vocabulary to express my gratitude toward them.”

According to a release from Karp, the settlement may be the largest jury verdict of its kind in Washington state.
(Photo-Anderson family photo via Tri City Herald)
https://petrescuereport.com/wp-content/uploads/PRR-Logo3b-300x38-1.png 0 0 Penny Eims https://petrescuereport.com/wp-content/uploads/PRR-Logo3b-300x38-1.png Penny Eims2016-08-07 13:00:242016-08-07 13:00:24Man awarded thousands for wrongful death of his dog
7 replies