A Florida woman was arrested after the authorities found a dog “near death” in her Sunrise apartment. According to the Sunrise Police Department, 38-year-old Lisamarie Charles was arrested on Saturday and her dog, a young pit bull dubbed “McCarthy,” was seized from her apartment and taken for emergency veterinary care. 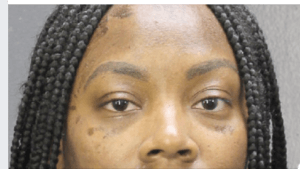 The alarming situation was discovered a maintenance employee who was in her apartment fixing an air filter – police who responded to the residence found a severely underweight dog who was in a small cage; the dog had blood coming from his nose. The arresting report noted that the dog had been subjected to long periods “of repeated malnutrition and mistreatment.”

In a release, the City of Sunrise Police Department recounted the squalid conditions inside of Charles’ apartment:

The apartment had an overwhelming odor of urine and feces upon entering. The victim animal was living in a cage that appeared to be too small for the animal and was extremely thin with bones protruding. The investigation resulted in the arrest of the dog’s caretaker for Animal Cruelty that could have resulted in the death of the animal.

McCarthy is recuperating under the care of the 100+ Abandoned Dogs of Everglades Florida, which has applauded the Sunrise Police Department for taking swift action to rescue him from Charles’ residence.