You are here: Home1 / News2 / Dogs3 / dog abuse4 / Animal rescues an integral part of our society 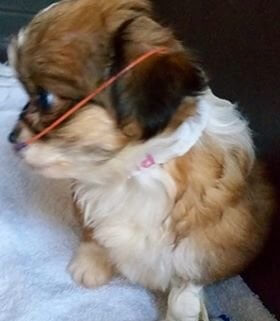 Animal rescue groups are an integral part of our society; Not just the well-known ones such as the ASPCA, or the Humane Society of the United States, but the smaller, individually run rescues. These rescues do not have any large marketing platforms to get their name out there, nor are they given grant funding.

They operate on a shoestring budget with only the help of a few dedicated volunteers and donations. Destiny for Dogs, founded by JoAnn Goodrich in West Palm Beach, Florida, is one such rescue. They are a non-breed specific rescue and rely strictly on fosters to care for the dogs they take in. They not only take in owner surrenders, but also rescue from local shelters. Their goal is always to find loving, forever homes for dogs regardless of age, health, or behavioral issues.

They recently had their hands full when five puppies were rescued from a home in Florida City where they were living in deplorable conditions. The owner is unemployed and is a “squatter” on the property. There was no electric or running water in the house. Other dogs had been rescued from this property in the past, and all were in bad shape.

While Jennifer and Dana were transporting the puppies from Florida City to Pompano where Jennifer was going to foster, two of the puppies started vomiting and had bloody stools. The first female puppy was close to death when they arrived at Coral Springs Animal Hospital. Lifesaving measures were taken for all five puppies from Saturday evening until Monday evening. The cost was $10,500.00+.  The first female puppy had to be euthanized Saturday night as the veterinarian said she was having difficulty breathing and was suffering. Sunday the second female puppy had less than a 20% chance even after a transfusion.  She passed away on Sunday.

The cause; all five puppies were infected with Parvo.  This was a result of the mother dog never having been vaccinated  and passing it on to her puppies. The three remaining puppies, Samson, Debbie and Tina struggled to survive. Finally, Samson was strong enough to be moved from the hospital to a quarantine foster home with Jennifer. He was able to eat and drink on his own and continued to thrive.

The two females, Tina and Debbie were moved from Coral Springs Animal Hospital to Pet Emergency and Referral in Palm Beach Gardens, Florida. Both puppies got transfusions and had to be fed through stomach tubes. Tina, although improving, was still not producing red blood cells.  Both dogs were kept on antibiotics. Panacur, and IV fluids.

After several days it looked like Debbie was doing better, but Tina was still lagging health-wise. Her glucose kept dropping, and she was either vomiting or suffering from diarrhea.  Both puppies were on oral medication, and it looked like Debbie would also be leaving the hospital soon. Happily, Debbie was able to leave the hospital and join her brother Samson at Jennifer’s home.  When she saw her brother Samson, her tail was wagging non-stop. She too was at the point where she could eat and drink on her own.

Sadly, precious little Tina, who only weighed 1 ¾ pounds, was not to join this happy reunion.  She took a turn for the worst. The doctor could barely detect a heartbeat, and Tina was struggling to breathe.  Since she was in such distress and unable to recover due to her weakened state, the staff decided to let her go in peace.  The long, hard struggle had taken a toll on her little body; she was a little trooper right up to her last breath.

Of the five puppies, only Samson and Debbie survived and are continuing to thrive under the care of their foster mother Jennifer. According to the latest update, they are doing amazing. 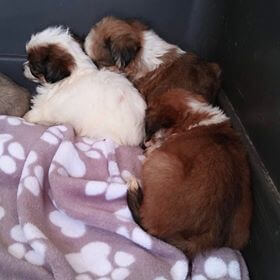 Because one person chose to own a female dog, yet never took the responsibility to have the dog spayed or vaccinated, three puppies died before they ever had a chance to live, and a now a rescue must struggle to make up for that person’s negligence.

The owner of the dogs has been reported to the local animal control.  It is not known yet if charges have been filed. Dana Marcus is still attempting to get the mother dog and the last remaining puppy away from her.

If you would like to assist Destiny for Dogs with the enormous vet bills, any amount would be greatly appreciated. Tax deductible donations may be made via Destiny’s PayPal Account
http://paypal.me/destinyfordogs
or checks made out to
Destiny for Dogs
326 Macy St
West Palm Beach, FL 33405

Or called in directly to the vet

Together we can change the world, just one random act of kindness at a time. – Ron Hal 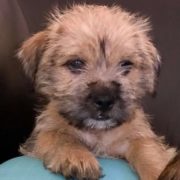 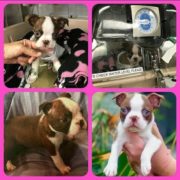 Suspect charged with felony for shooting arrow through cat’s head