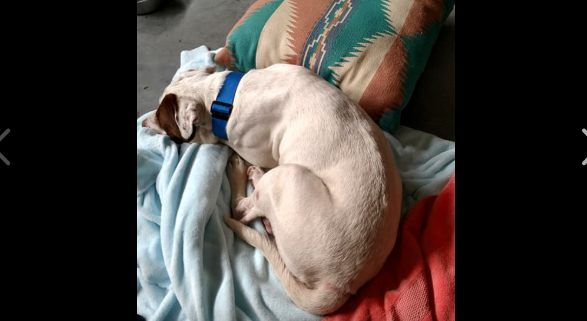 On Tuesday morning, the owner of a North Carolina gym discovered an abandoned dog who had been tied to a trailer during a rain storm. Corey Reich isn’t sure how long the young dog was left tied to the trailer, but the dog was “soaked” by the time he was found – so he surmises that he had been there for some time.

Reich took the dog, dubbed Uno, inside and gave him food and water – he told Fox 8 News that Uno was frightened and cried during the night. To comfort him, Reich decided to bundle up and snuggle the abandoned dog – he described how his presence comforted the dog:

“As soon as I was in there five minutes, he laid down and went to sleep. I laid beside of him and from 1:30 to 5 in the morning, he didn’t move.”

A good home is needed

Reich is already bonding with Uno, but he isn’t able to keep him. On his Facebook page, he wrote:

He is very sweet but he does not like to be left alone (rightfully so) I slept with him in my garage last night. His barking kept waking the baby lol. He will not eat unless I sit with him or I’m in the same room.

He needs a home where he can run and have lots of attention. Especially at first with the trauma he has gone through. I would love to keep him but with my other rescue dog, a two year old and a 6 month old I’m not sure it’s in the cards. I will not let him go unless I absolutely know he will be taken care of, maybe even spoiled too much! Thanks everyone for your kind words and prayers.

Multiple people have left comments on Reich’s Facebook post indicating that Uno is theirs – it is unclear who the dog actually belongs to.

At least he is no longer outside – tied up and wondering what he did to deserve being abandoned.

Yesterday in the news: Dog begs to be adopted after sudden death of her owner – more here.

Just a crow and a dog playing fetch