You are here: Home1 / News2 / Dogs3 / Dog, tethered in her yard, shot in the face while police tried to apprehend... 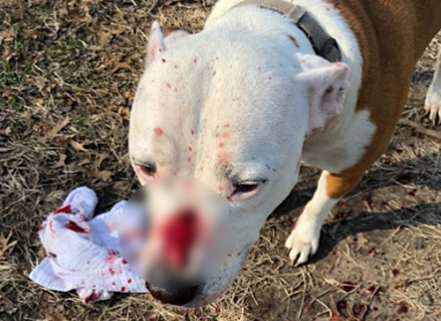 A dog took a shot to her face on Thursday after an officer encountered her while trying to apprehend a suspect in Fayetteville, Illinois. According to the Fayetteville police, the officer reacted to the aggressive dog, not realizing that she was tethered.

In a press release, the authorities provided an explanation of what took place:

The authorities acknowledged that the dog was on a lead:

Upon investigation the dog was found to have been attached to a lead line that extended to where the officer was located and fired his service weapon. By admission of one of the residents, it was found that the dog has previously been aggressive, which was confirmed by other officers.

Despite being shot in the face, the dog is expected to survive.

The suspect, identified as Robert J Hock, was apprehended on multiple outstanding warrants inside of the home at the property where the dog was tethered.

Does anyone care about a 16-year-old dog without a home?

Olive and Chopper: Best buds whose owner never came back