You are here: Home1 / News2 / animal cruelty3 / Dog died after someone tied him to tree and abandoned him for months 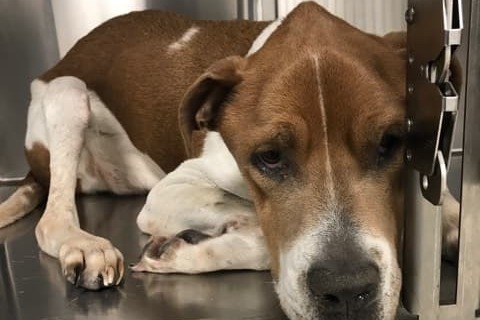 A community is grieving the death of a dog who was tied to a tree and left to die in Chicago, Illinois. The mixed breed dog, dubbed Toby, was tied up behind a North Chicago apartment complex after his owner was sent to jail…as the weeks turned into months, the tethered dog slowly wasted away without access to proper food or water.

In late September,  after two months of struggling to survive without care, Toby was picked up by North Chicago Animal Control; if not for his access to pears which had fallen from the tree he was tied to, Toby would have already been dead.

Shortly after being rescued, Alison Graham described the starved dog’s condition and treatment:

“Toby’s doctors and nurses called him “Eeyore” 💔💔💔. He couldn’t keep himself warm, so they wrapped him in lots of “blankies” and had something called a Bair Hugger inflated hot air blanket that kept his entire body warm and comfortable. He LOVED the Bair Hugger. He snuggled up under it, and slept (and snored) so peacefully. Sunday morning he was given an appetite stimulant and he ate some chicken “ravenously”, so we were starting to gain hope that he had been through the worst and was on his way back.

The damage was done

Though Toby was taken to a veterinarian for life-saving care, help came too late. Toby’s body was shutting down and the emergency care, including a blood transfusion and nasal tube feeding, that he was being provided with was just not enough. Graham wrote:

When it came time, Shari, myself, and his doctor were in the room with him the entire time, and Shari was holding him, talking to him, and stroking him, and we were going over every possible last ditch but humane treatment option that anyone could think of. His doctor could not have been kinder to him, and she was in tears. She had to excuse herself. I have been in rescue for 15 years and I know doctors cry and grieve because they care, but they do that out of sight of the pet guardians.

Toby knew love and kindness in his last moments – thanks to compassionate people, he knew that he mattered.

People saw Toby tied to that tree…but nobody did anything until it was too late to save him. If you see a dog suffering, please reach out to officials and make a report, before it’s too late.

Rest in peace Toby – you did not deserve to be left alone and forgotten at that pear tree.

Read more of Toby’s story at this link to the fundraiser which was set up to provide him with the veterinary care that he needed.

Shepherd, believed to be responsible for livestock deaths, has been killed