A gruesome and disturbing discovery was recently made just off of a road in Morgan County, West Virginia. According to Thursday’s Your 4 State News, the bodies of seven dogs, who had been fatally shot, were discarded in the town of Paw Paw, just off of Plains Road.

One of the dogs belonged to Benny King, who had been searching for his pet since Monday. King told the news station, “I think it’s pretty low and dirty of someone who just take it out on an animal like that to just kill them in cold blood, especially a dog.”

Why someone would kill, and dump, the dogs remains a mystery. The Morgan County Animal Control has instigated an investigation into the cruel situation.

The discovery of the deceased dogs is undoubtedly cruel, but not as unusual as one would hope. Not long ago, seven dead dogs were discovered along a rural road on the outskirts of Charlotte, North Carolina. Read more about that frighteningly similar situation at this link.

(Screenshot via Your 4 State News) 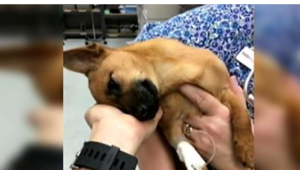