You are here: Home1 / News2 / Dogs3 / Play ball with your dog? You must read this terrifying story 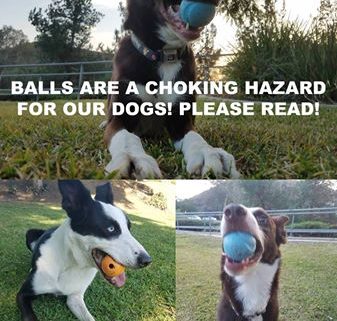 Anyone who plays ball with their dog must read the following terrifying life-and-death story. Details of the near fatal situation were recounted by the owner of a dog named “Torch,” who wants other people to be aware of the frightening risk that can go hand-in-hand with a game of fetch.

If you play ball with your dog(s), you probably want to read this. I did not particularly want to share this story because I didn’t want to relive it… However, it needs to be shared. This was, far and away, the most terrifying thing I’ve ever experienced.

Torch was chasing a ball yesterday, as he and my other dogs have done countless times over the years. After he caught it, he immediately laid down and pawed at his face. I ran out to him, saw his mouth open, and didn’t see the ball. It was lodged deep down in his throat and he was choking badly on it.

Jeff was there with Slayte playing disc on the other half of the field and ran over when I screamed at him. I tried to do some kind of Heimlich maneuver, but that didn’t work. We could feel it deep in the ribbed part of his throat. Jeff stood behind him and gripped the bottom of his throat. I stuck my hand down his mouth to get it. Despite trying to get my hands around it, there was no way I could get it. Jeff was able to push it up a bit, but it slipped back down. Torch couldn’t breathe the entire time. Honestly, I was convinced that Torch was going to die. His tongue was purple and eyes were rolling in the back of his head.

Jeff pushed up on his throat once again and I stuck my hand back down. This happened to be a chuck-it whistling ball, which has a hole on each side (doesn’t go all the way through). I don’t want to think about if there had not been a hole. By some miracle, I got my finger in one of the holes and slowly pulled it while Jeff still had his hands clamped on his neck to prevent the ball from going down. It took what seemed like an eternity, but I finally heard air flow in and was able to pull the ball out. He came to, but wasn’t able to walk right away. He perked up while carrying him to the car. We immediately rushed to the vet. 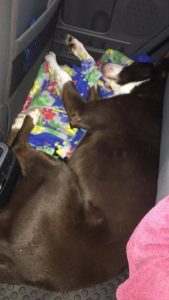 You may believe that this was a freak accident – something that you personally do not need to worry about. Not so reports Torch’s veterinary staff; Kirby stated:

I can’t fully explain how awful this was to experience, but I will tell you it’s enough to ban my dogs from any ball they have potential to swallow whole. I didn’t even think it was possible. Apparently, if it can fit behind their canines, they can swallow it. The vet tech at the animal hospital said it’s not uncommon at all and they get this type of case about 2x a month. I wish I would have known before poor Torch had to endure that.

Miraculously, Torch is okay – he spent a night at the veterinary hospital for observation, but he is back to himself. His owner is sporting some serious hand wounds from the terrifying ordeal, but it was a small price to pay for Torch’s survival. Kirby said, “My hand is a bit beaten up, but I would’ve let him chew both my hands off before I’d let him choke to death. I’m ecstatic to say he’s going to fully recover before I do.” 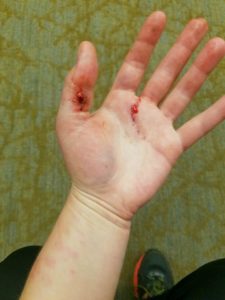 Please share this article – you may save another dog’s life.

Your comments are welcome below.

Note: Torch’s owner has commented on the hand injury:

Torch did not bite me purposefully. He has never attempted to bite me. I believe that he was trying to swallow the ball because he couldn’t breathe and in the process was opening and closing his mouth. In the midst of his panic from not being able to breathe, I cannot blame him for his reaction. This was not a situation where we could not get him to a veterinarian to remove the ball. We had only a couple minutes to get the ball out. The hand injury is not the concern of this post, but I really wasn’t trying to document the event for Facebook. I felt these few pictures were better included to bring attention to the issue here, which is to not throw a regular sized ball to your dog.