You are here: Home1 / News2 / Dogs3 / One of the last Vicktory dogs has passed away 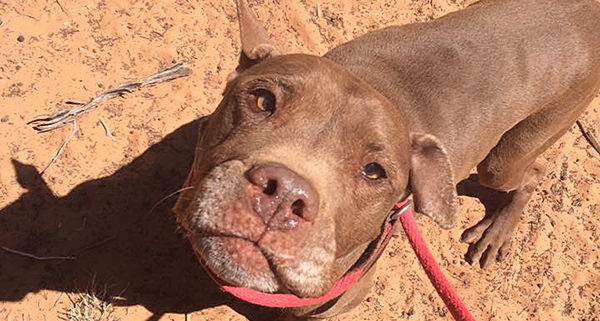 On Friday, one of the last Vicktory dogs (dogs rescued from the infamous Michael Vick “Bad Newz” fighting operation), passed away. Best Friends alerted its followers to the death of Willie Boy on Tuesday.

In 2007, Willie Boy joined the Best Friends family after being rescued from his former life of forced fighting. Best Friends stated, “neither his traumatic past nor his frail health could ever wash away the best parts of his character, and the people who became his family at the Sanctuary will always remember him as a fun, happy and gentle soul.”

At the ripe old age of 13, Willie showed his Dogtown caregivers and members of the Best Friends veterinary team that it was time to be released from his failing body. The dog who had overcome so much was finally too weak to continue rallying.

Best Friends stated, “This time, however, he became so weak that his family knew it was time to say goodbye. Though Willie’s passing brought heartache to those who loved him, he left the world with ease and at peace, surrounded by their love.”

Willie, one of only four remaining Vicktory dogs at the Sanctuary, had too many issues to be adopted, but he was adored by his Best Friends family. Michelle Weaver, director of animal care at Best Friends, stated,

“Although he wasn’t able to be adopted, this was truly his home and he was a cherished member of the Best Friends family. Here he was safe, he was loved, and he lived a good life.”

Please share this heartfelt good-bye to a true survivor.

Please share this article to help save a life!