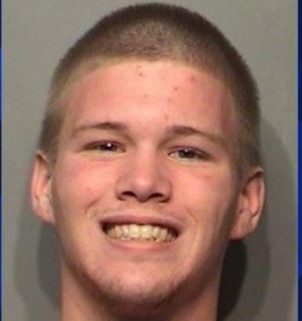 Do you recognize this smiling mug? Police in Des Moines, Iowa, want to find 25-year-old Christopher Vogel and question him about an act of animal cruelty which ended the life of a puppy belonging to an acquaintance.

According to KCCI News, Vogel is believed to be the person who snapped the neck of a Corgi puppy – astonishingly, the violent act, which took place on July 6,  is said to be the result of an argument over Wi-fi.

The Des Moines Register reported that Vogel allegedly showed up at a couple’s residence “unannounced” and demanded to use their internet. When the residents refused, Vogel allegedly grabbed their puppy and claimed that he would “snap” the pup’s neck.

The Corgi’s owners found their grievously injured puppy in an apartment stairwell a short time later. The pup was going to be taken to the Animal Rescue League of Iowa for emergency care, but did not survive. On Tuesday, the animal-welfare agency stated:

WANTED: Christopher Vogel is wanted in Des Moines for allegedly snapping a 12 week old puppy’s neck after an argument over WIFI with the pup’s owner.

The puppy died with one of our ARL Animal Control Officers, on their way back to the ARL to get medical help.

Anyone with information on Vogel’s location is asked to call Crime Stoppers of Central Iowa at 515-223-1400.

Vogel has several warrants for his arrest – if you see him, or have information about his whereabouts, please contact Crime Stoppers at 515-223-1400.

Investigators in tears as victims of dog cruelty case rescued in horror hou...

Not again, another dog mistakenly put down at animal shelter
Scroll to top