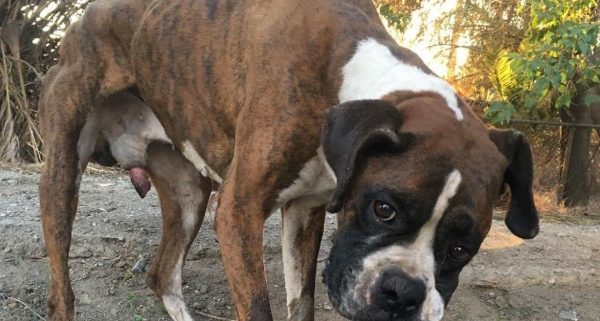 A skeletal dog, who was dying from malnutrition, was discovered by a Los Angeles police officer who was driving home from his shift. According to Wednesday’s KTLA 5 News, if not for Officer Rick So’s keen eye, the emaciated boxer, dubbed “Bronx,” may have died alone.

Officer So feared that the frail dog had been struck by a vehicle, so he called his partner, Officer Charles Winzer, for assistance. While the officers waited for animal control to arrive, more help arrived – against all odds, the good Samaritans who stopped to help happened to be volunteers with area rescue agencies.

One of the people who stopped, Maral Mofrad, requested that the officers give her time to find a rescue group to take the ailing dog in, and after some calls, one was found. According to KTLA, Bronx is now under the wing of Border Buddies Rescue, and recuperating in a foster home.

A fundraiser set up to help Bronx get the veterinary care that he needs has already raised nearly $2,000 – click here to read more.