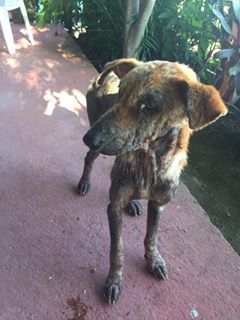 When Los Angeles resident Chata Gil recently visited her family in El Salvador, she was shocked and disheartened by the many strays which roamed the streets and the terrible condition many of them were in. One dying dog especially caught her eye and broke her heart.  He was small and emaciated and bleeding from various spots on his skin. The poor dog was going from table to table in an outdoor restaurant begging for a scrap of food. People chased him away calling him ugly; having absolutely no compassion for his suffering. Chata bought the dog some food much to the criticism of those sitting around her who viewed the animal as nothing more than an annoyance.

But Chata could not get the pathetic, dying dog out of her mind nor the callous way he was treated by others when he looked to them for help. She decided to go look for him and found him curled up on the street as if trying to be invisible.  When she picked him up, he looked at her terrified that she was going to hurt him. She gave him some food to gain his trust and waited for the local rescue Asociacion Milagros de Amor El Salvador to accompany her and the dog to the vet.

Initially she thought the most merciful thing to do for the dog was to have him euthanized to end his apparent suffering. Once there he had an extensive blood panel run to check for organ function. Surprisingly the dog was doing better internally then externally. The vet guessed he was about 3 years old.

Chata was due to return to the states a few days later and Gil put out a plea on Facebook for some rescue stateside to help her with the dog that was now named “Sal.”

Tracy Lystra of the Save Huey Foundation stepped up and offered to pay for Sal’s continued vetting while he remained in El Salvador. Once he was medically cleared for travel, funds would be gathered and plans would be made to get Sal to Southern California.

Sal’s first day of vetting incurred a bill of $800.00. He desperately needed and was getting treatment around the clock. His care is currently being monitored by the rescue group in El Salvador.  They are keeping Tracy updated on Sal’s needs and medical bills which she is paying via Paypal. They in turn are sending her copies of the receipts. 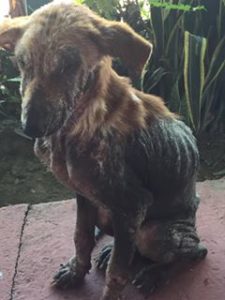 Sal when he was found in the streets of El Salvador

As of November 19th, 2016, Sal is no longer requiring a constant IV and his appetite has increased. Although he still sleeps a lot, he is showing signs of improvement.

Little Sal, the ugly street dog that everyone looked upon as an annoyance except for one person who saw him as a beautiful, worthwhile, living creature worth saving, has a long road ahead of him. Tracy Lystra and the Saving Huey Foundation are committed to helping him. To them. Sal represents just one of the thousands and thousands of dogs that suffer all over the world while passersby turn a blind eye to them annoyed by their existence.

The Saving Huey Foundation is a 501(c)3. It was established in 2015 and is dedicated to dogs that have been abused and neglected. Tracy herself has worked in special needs rescue for over 20 years.  The foundation was formed around a dog named Huey that came to them in 2014. He had been used for dog fighting and was badly abused.  The Saving Huey Foundation also speaks out against this horrific blood sport as well as all forms of animal abuse.

It will be a very costly endeavor to bring Sal to the U.S. and continue his medical treatment. Please help this very special dog by donating to the Save Huey Foundation via PayPal using savinghuey@gmail.com  or by mail to; Saving Huey Foundation, 30724 Benton Rd. Ste. C 302-479, Winchester, Ca 92596.

For updates on Sal and other dogs rescued by Saving Huey please visit their Facebook page at Facebook.com/savinghueyfoundation or the website https://savinghuey.org/.