A stray dog running loose in Kilgore, Texas, wound up creating some turmoil when he hijacked a police officer’s patrol car, and stealing some beef jerky. The Kilgore Police Department recounted the rather humorous situation to Facebook followers over the weekend, writing:

PSA- Found dog. Officer was dispatched on a animal control call (Aggressive Pitbull). Since we don’t have 24/7 Animal Control our Officers often answer these types of calls after hours. Many times we can handle the issue without calling the Animal Control Officer out. The Officer located this dog running at large and thought he might be able to quickly capture it.

The officer intended to lure the stray dog into the backseat of his patrol car, but things did not go as planned. The department explained:

In his haste, the Officer also left the driver’s door open. Cujo decided he wasn’t going to jail and instead jumped into the front seat. As the Officer tried to get him out of the front drivers seat, Cujo became aggressive. The door was shut to prevent injury to the dog or Officer. The Officer’s car had been hijacked!!!

Inside of the car, the dog was enjoying some air-conditioning and beef jerky – and he did not want to leave, or share. The department wrote:

After hearing some strange radio traffic about this hijacking, I (Chief) asked some questions over the radio. Moments later the Officer texted me a picture of the situation, which I’ve included. I texted back that the dog didn’t look happy. The Officer texted with this statement, “He ain’t, and neither am I.”

All is well that ends well – the “aggressive” dog was seized by animal control and away from the A/C and jerky, he showed his softer side. The Longview Animal Care and Adoption Center posted an “after” photo and wrote:

We’d like to taco about how Cujo is doing this morning. He’s being super sweet and glad to have been rescued by the wonderful people at the Kilgore Police Department. 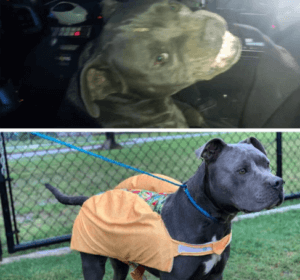 Photographer horrified at ‘elephants screaming in agony’ in Ind...

Puma and Kiwi tremble in fear: Owner moved and never looked back
Scroll to top