You are here: Home1 / News2 / Dogs3 / dog news4 / Waking up with the most adorable Samoyed 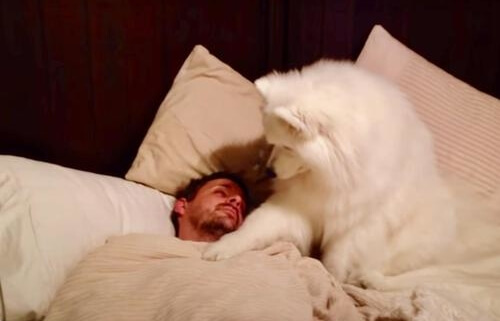 How would you feel waking up alongside of this adorable Samoyed? It would seem this pup has the wake-up routine down pat, and even though this video is not new, who doesn’t need a smile, and a reminder how much we love our dogs? [not that we need to be reminded]

Her name is Lexi, and her approach to the morning might not be so different from other dogs, so who are we to judge her tactics for waking up dad? So let’s start with Lexi on the bed sitting peacefully staring down at her dad Tom Brown while he sleeps. Maybe Lexi thought staring at him would magically wake him up, and there she sat patiently waiting for his eyes to open or at least some kind of signal dad’s awake?

She patiently continued to stare at him and eventually used her front paw to gently tap on his chest as if waking a puppy. And he still wasn’t awake!

Well still no movement, so Lexi moved onto the next phase of “operation wakeup” and gently leaned over and touched her dad’s face with her nose. And much to the disappointment of perhaps one of the most adorable dogs ever, her dad still didn’t move.

It would seem then that Lexi decided to pull out the heavy artillery in her arsenal of cuteness, and this time she pushed her paw on his face and pressed her nose harder than before – and this time against her dad’s nose. Of course, her dad had a reaction and jerked his head away mumbling “Lexi…”

Oh no, Lexi isn’t going to stop now; she finally got a reaction and continued nuzzling into his chest and finally kissed him. Dad rolled over to thank Lexi for the kisses and even though he rolled over as if he wanted to go back to snoozing, Lexi was sure her dad was soon to get out of bed and take her for a walk.