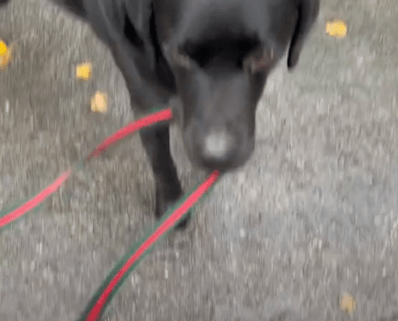 A viral video posted by Tik Tok account holder The Labraseal filmed in Suffolk, United Kingdom has brought viewers to tears. More than 3.5 million viewers have “liked” the heartbreaking video; the real meaning of the story not revealed until the end of the short clip.

And when a dog’s best friend happens to be another dog, their bonded friendship always seems to have a profound effect on all of us. In this video, The Labraseal begins with a black Labrador retriever named Denzel walking beside another similar lookin pup named Casper. The song “Wake Me Up Before You Go-Go” by Wham accompanies the clip.

Suddenly the song stops, and the scene moves ahead to Denzel walking alone with the leash in his mouth, and it becomes clear the other dog is no longer alive. In another video, it is revealed that Casper died recently from cancer.

“The sad thing about having two dogs, only one of them gets to spend the rest of their life with the other.#rip”

The video, which can be seen by clicking here was posted on October 7 and continues to be very popular with more than 26,000 comments. Many viewers expressed their sympathies towards Casper’s passing, many expressly mentioned the story broke their hearts and ruined their entire day, and some passed on their condolences to Denzel.

All in all, it’s so sad when our four legged friends die – what must Denzel have been feeling?

Rest in peace Casper. You were loved.

‘Ana’ is beautiful and loving but she has been waiting more than...