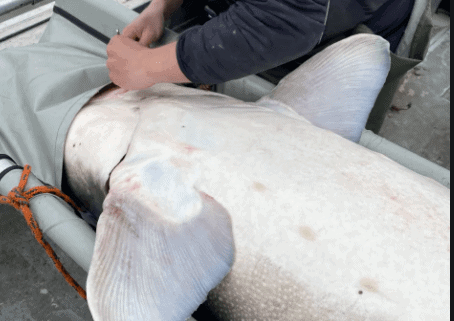 The largest Nechako white sturgeon ever caught and released on the Nechako River earlier this month, near Vanderhoof, British Columbia weighed in at 336 pounds and measured 9.6 feet.

According to the Nechako White Sturgeon Conservation Center, researchers soon realized, as the fish came closer and closer to the boat, her size would become a record. After examining her onboard and at the research center, scientists stated she was nearly blind, however “remarkably fertile.”

“She was first caught in 2011 and this capture was actually only 10 kilometres away from her original capture,” Jordan Cranmer, a junior researcher at the center stated according to CBCNews.

Since the female’s capture and release in 2011, her weight has increased 52 pounds and her overall size has increased seven feet longer. Sturgeons will spawn and then not spawn again for years.

On the organization’s Facebook page, a naming contest was announced; results promised to be announced on June 10.

“Since this sturgeon is bigger than all other sturgeon of fame at the NWSCC we could use your help in naming her! Mention your name suggestions in the comments and the staff at the NWSCC will take a vote on the most popular name.
The winner of this contest will win their very own sturgeon stuffy!”