You are here: Home1 / News2 / Dogs3 / dog news4 / South Carolina couple fights to get their dog back from local rescue 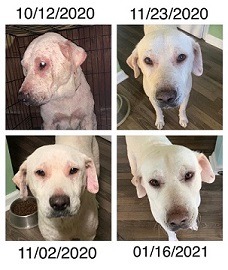 An Elloree South Carolina couple is struggling to get their dog back from For the Love of a Paw Rescue.

Tammy Barrett and her partner Jerry Kinzler claim Luke, a six-year-old yellow lab mix belongs to them. According to Tammy and Jerry they witnessed Luke living a sad life in the streets. His owner did not appear to care for him. One day Jerry was so tired of seeing Luke on the streets hungry and neglected, he approached the owner and asked him to surrender Luke, then named Whitie to him.

On October 6, 2020, the owner signed Luke over with a surrender statement signed by two witnesses.

Images of the text messages and a timeline of events can be viewed on the page “Return Luke Home, Luke’s Timeline”

Luke was with For the Love of a Paw a total of  six days. However, Luke escaped the facility twice and each time Jerry had to re-rescue him. Due to the two escapes Jerry felt that Luke was not getting the best day to day care at the rescue, so Jerry brought Luke back home on October 12, 2020, where he continued to reside until For the Love of a Paw illegally stole Luke on February 19, 2021 and has refused to return him to Jerry and Tammy since that day.

According to Tammy, For the Love of a Paw contacted her and Jerry, telling them Luke had a follow-up appointment at Lake Marion Animal Hospital on February 19th.  They were advised to drop Luke off at that location, and they would be called when it was time to pick him up.

However, Jerry and Tammy never got to pick up Luke; For the Love of a Paw picked him up instead.

For the past several months Tammy and Jerry repeatedly demanded that Luke be returned to them, but their demands have been ignored or dismissed by the rescue. They have received further documentation from For the Love of a Paw members stating the theft of Luke was premeditated.

What is also troublesome is the fact that For the Love of a Paw’s two rescue buildings are less than half a mile from where Luke suffered his entire life.  Members of the rescue drove by him day in and day out and did nothing to help him. Jerry did what no one else in the community would do and saved Luke from suffering and neglect that went on for six years.

On October 8, 2020, For the Love of a Paw released this statement on Facebook giving a completely different account of the events claiming they rescued Luke from the streets, by having the owner Isiah Williams surrender the dog  to them,

They had previously rescued Luke’s other nine brothers and sister in August 2014 where they paid $20 for each pup to the owner. The owner insisted on keeping Luke until 2020 when he claimed he no longer wanted him because Luke wasn’t worth anything to him.

On February 26, 2021, a friend of Jerry, named Mickey Weeks contested For the Love of a Paw’s Facebook post by reiterating Jerry’s claims of how Luke was obtained from the owner.

Because of their struggle to get Luke back legally from For the Love of a Paw rescue, Tammy and Jerry have hired attorney Ted Corvey with Corvey Law Firm for the case. Corvey achieved recognition as the key prosecutor in the case of Caitlyn, a dog that was rescued after horrific abuse. Watch Caitlyn’s inspirational and uplifting rescue here

Jerry and Tammy filed a complaint at the Orangeburg County Courthouse on March 5, 2021, against For the Love of a Paw rescue. The rescue had 30 days from the day they were served to respond to the complaint.  They did not respond within the time frame and are now in default, so the case is continuing.

Since Luke’s taking from the vet’s office on February 19, 2021, questions have been raised.  If For the Love of a Paw had Luke’s best interest at heart, they would not have taken him from Tammy and Jerry, the only family he had known since October 6, 2020 .

Why didn’t they just come to their home to pick Luke  up?

Why didn’t For the Love of a Paw  respond to the complaint against them in the Orangeburg County Court  in a timely manner? It appears they have no legal recourse, or documentation of ownership so they had to take him under false pretense.

A  fundraiser to help Tammy and Jerry cover the ongoing legal expenses has been set up by the International Animal Welfare Coalition.

Donations can be made here

Luke is not an inanimate object to be passed back and forth and withheld from those who truly love and care for him.  He spent six-years of his life being unloved and neglected and does not deserve more emotional suffering.

Hopefully the Orangeburg court will do what is right and ethical. 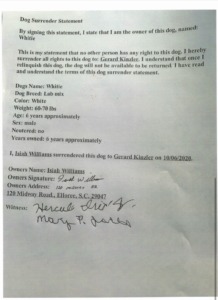 Letter of surrender to Jerry Kinzler from Luke’s owner

Injured dog giving up after interested party failed to show up at shelter –...