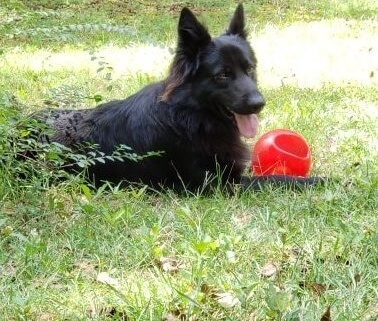 Misguided keyboard warriors have targeted a sanctuary that has been caring for a homeless dog for more than 865 days. On Tuesday, Nieko’s story was shared on the Pet Rescue Report after the Erin Regan Animal Sanctuary created a social media post about the excessive amount of time that he has been living without a family of his own.

The sanctuary wrote about their loss of hope that he will ever find a family of his own. The post (since deleted from the sanctuary’s page) read in part:

We have given up hope that he will ever find a family. He spends his days and nights mostly alone. He lives in our garage by himself. He has ample yard time and a lot of time to run and play.

Their loss of hope was not what triggered people – it was their statement that Nieko spends his nights in a garage. On Wednesday, the sanctuary offered more details about the “garage” that Nieko is in at night, and explained why he is there:

Nieko is not being neglected and he is not suffering. Nieko is getting the love and care that he has deserved for his entire life, but the sanctuary wants more for him. They want him to have a family of his own, and given the length of time that has passed (more than 865 days!!) they are losing hope that adoption will ever be in Nieko’s future.

Why is this dog not being adopted? He has health issues, and he has bite history (a veterinary tech was bitten during a painful exam). He is dog selective and not good with small animals (typical of most German shepherds). Does this mean it’s impossible? No, but it does make adoption difficult.

Nieko was rescued from a neglectful situation years ago – today he is healthy and happy, but lacking a family. If Nieko went to an animal control agency all those years ago, he would more than likely be dead by now, because open-intake animal control facilities can’t hold onto hard-to-place dogs for any length of time. When space becomes an issue, dogs are euthanized, especially if they are difficult to place because of “issues.”

So to every keyboard warrior who has not taken on a hard-to-place, homeless dog with health issues and bite history – take a step back. Until you have walked a day in a rescuer’s shoes, you have no idea what they are going through, or how hard they are working to keep the animals in their care happy and healthy. Erin Regan Sanctuary assured their followers that they are doing their best to give the animals in their care the very best that they can:

Man faces felony charge after killing neighbor’s cat, who hissed at his...

Woman’s hero German shepherd scared stranger off as he approached her...
Scroll to top