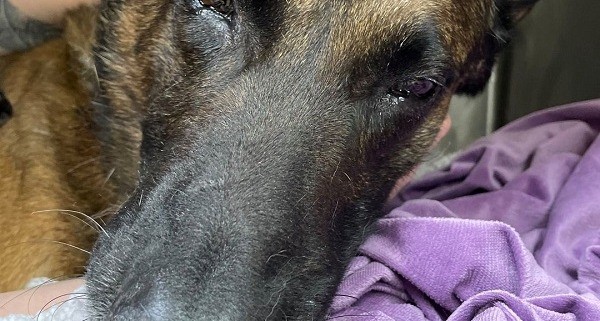 A German shepherd, who was viciously stabbed while protecting his owner from an attack, has passed away. The dog, named Alexander, was receiving care through Nevada’s Animal Foundation, which announced his passing on Monday. The animal welfare agency writes:

We are devastated to share the news that Alexander did not make it. His injuries were just too severe.

We find comfort in knowing that Alexander died a hero, and we hope that you do too. As local news outlets have reported, Alexander sustained his injuries while protecting his owner from a vicious attack. He very likely saved his owner’s life.

The rescue group’s initial post about Alexander was vague with regards to what happened:

Animal Control brought Alexander to The Animal Foundation this morning with multiple stab wounds to his side, neck and front legs.
We don’t know why or how anyone could do this to an animal, but we knew we had to help Alexander immediately.

Our Vet Services team quickly treated his pain and tended to the wounds on his neck and legs. When they examined the gash in his abdomen, they realized his injuries were critical.
Alexander was rushed to Lone Mountain Animal Hospital for emergency surgery. The stab wound to his side was so deep and so severe that they had to remove Alexander’s spleen and part of his intestine.

According to 8 News Now, the dog’s owner suffered no life-threatening injuries in last Thursday night’s attack and the suspect has not been located.

The attack took place in the 8700 block of Pavia Drive, Las Vegas, Nevada. The District Attorney has stated that they do not have information about criminal charges at this time.

Once a pristine looking Great Pyrenees months on the street have taken its ...