You are here: Home1 / News2 / Dogs3 / dog news4 / Shelter remembers recent passing of dog who spent 15 years with them 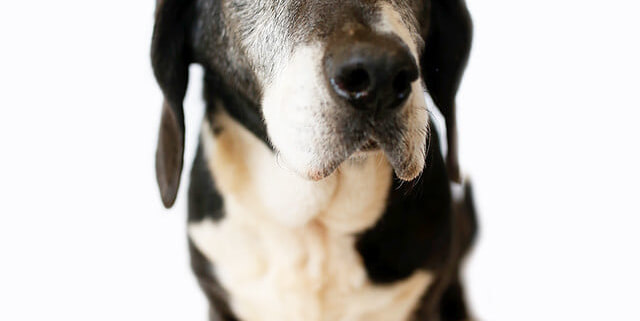 A California animal shelter has fond memories of their longest resident, who passed away recently after 15 years in their care. This week, Basset Rescue Network, Inc. at Daphneyland shared memories of Otto, a Basset hound who was taken under their wing over a decade ago after his family surrendered him to the Lancaster Animal Care facility in 2006.

We are often asked who our longest resident of Daphneyland is.This changes obviously as hounds get adopted or live their lives out with us. For the last few years that hound has been our Otto. Otto has been with us for 15 years.

Reminiscing about the day of their first encounter with the homeless dog:

December 2006. A young Bassador (Basset/Lab mix) had been owner surrendered to Lancaster shelter for killing a family kitty cat.
It was a snow storm day upon his arrival and he came to the isolation area as he had kennel cough. He immediately jumped out of his pen and was attempting to eat through a window when I first met him all those 15 years ago!

According to the shelter, Otto’s original family (the family who owned him before the people who surrendered him to the Lancaster shelter) found his listing on their website and filled in details of his former life. They write:

He had been given away to a family when he was very young. Originally he had kids and kitties. Evidently that family was the one that surrendered him.
Otto not only did not take to a c@t, he also detested other dogs. Except one; A furry red & white mix named Murray. Murray and Otto were instant pals. Playing together, sleeping together – eating together. The two beyond adorable.

Otto never took to another dog, but he adored people. The shelter said, “He loved people, and wrapped us all around his chunky paw.”

But the inevitable march of time claimed Otto, as it does every beloved pet.

Today was the day his body gave out and some pain reared it’s head over and above what his medications could hold. His bestest gal Amanda took him for that loaded bacon, cheese burger and chocolate cake, then sang to him as our vet gently helped him on his path to his ‘fur’ever pal awaiting Him. I will be watching for that black hound jumping with joy as he meets up with that red & white fluffball and they romp off together where the grass is forever green.We love you Otto. So many years where you gazed up at us every night as we sang you to sleep. Warm blankies tucking you in. Those gorgeous brown eyes sparkling.Otto forever of Daphneyland ATB 11/2/21

Update on ‘Rocky’ who just didn’t want to be caught has since...

Senior shelter dog survived cancer, but nobody wants him
Scroll to top