You are here: Home1 / News2 / Dogs3 / dog news4 / Senior dog disappeared a decade ago, he was recently abandoned, then reunited...

A decade ago, a Labrador retriever named Samson disappeared, leaving his family heartbroken. Imagine the family’s shock when they received a call from the City of San Antonio’s Animal Care Services facility letting them know that their dog had been found.

Samson’s amazing reunion was shared with followers of the animal service’s Facebook page on Wednesday. The now white-faced dog was one of six dogs who were taken in at the facility after being abandoned. The shelter stated that Samson was in “pretty rough shape” when he was first taken in. The senior dog was dirty and covered in fleas…but the shelter scanned him for a microchip, to see if he possibly had a responsible owner out there somewhere.

Amazingly, Samson not only had a microchip, but the information on that chip was still accurate. The shelter writes:

Before he was able to get treatment, he was scanned for a microchip – and we found one! Mr. C was shocked to hear that Samson had been found, and rushed over to ACS.
He was so anxious to see his dear Samson after so many years but finally, it was time for the long awaited reunion. Mr. C kneeled down and said softly, “Samson, it’s me. Do you remember me?” 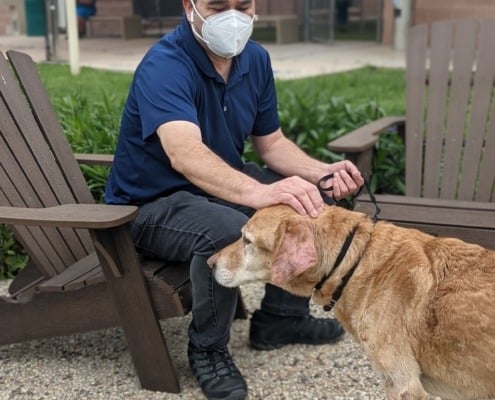 Writing of Mr. C’s sadness for the years that were lost:

Samson gently and slowly walked up to him and sniffed his hand. We could tell Mr. C was holding back tears as he said, “They took the better years from us.”

The shelter used Samson’s amazing story to remind all pet owners of the importance of microchips:

We are so grateful that they can be together now. We can never stress enough how important it is to microchip your pets and microchip licensing is the law here in San Antonio.

Congratulations on your reunion, Mr. C and Samson! We hope you can make some beautiful new memories. ❤️

I Prefer Dogs To People