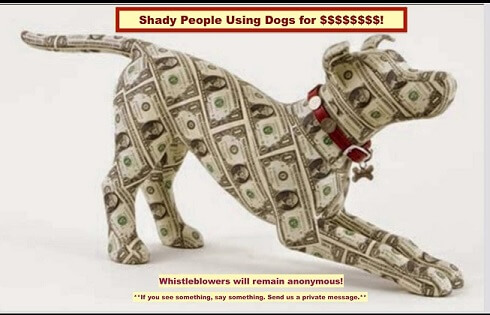 There have been many self-proclaimed rescues turning what should be a charitable cause into a get-rich-quick scheme.

These are not rescues by the normal definition but entrepreneurs finding this is a much quicker way to gain cash by preying on an animal loving, compassionate public.

Who wouldn’t want to donate to help save an injured or maimed animal or one that is euth-listed at a county shelter?  People dig deep when it comes to helping animals and children and these schemers know it and take full advantage.

Fake rescue groups are a danger to the welfare of many abandoned animals. Sadly, there has been an upsurge in investigations of “self-proclaimed rescues.” These rescues are often charged with hoarding, unacceptable living conditions, neglect, abuse, and embezzlement.

The true tragedy for the animals who end up at these self-proclaimed rescues is they often suffer more there than they did at the shelters or even being homeless. And the other tragedy is the people who naively donate money and supplies to these fake rescues are unwittingly allowing the abuse and neglect to continue, believing the animals are in a loving, nurturing, healthy environment.

Would a thinking person trust any of these people to be the caretakers of animals or trust them with large sums of money coming in from donors? I think not.

There are way too many supposed “rescues” making money off the backs of the animals they should be helping.

They are taking money from compassionate, generous donors and using a large part to line their own pockets.

Before using, adopting from, or sending money to any animal rescue, do your homework, look up all public records on them from the local animal control offices and humane societies to the local police or sheriff.

If you pledge for a dog to be pulled from a shelter demand follow ups, photos, medical records, training bills etc.  If they can’t supply them then they are not a legitimate rescue and need to be reported.

Query their financial records and tax statements from https://projects.propublica.org/nonprofits/.  You can also search on the IRS. You have a right to see where the money you are sending in is going to.

If these fake rescues are not stopped and their money making schemes continue, the lives of many animals that could have been saved are destined to be lost.