You are here: Home1 / News2 / Dogs3 / Police investigate after video shows man being kicked out of restaurant... 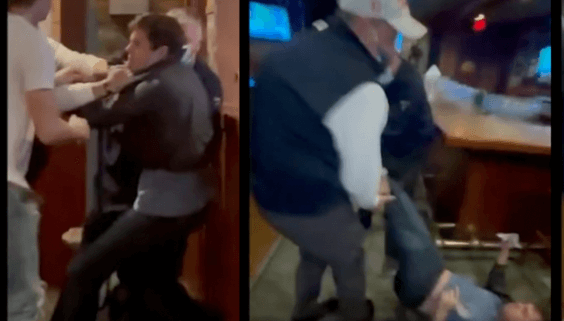 Police in Waterloo, Ontario, Canada, launched an investigation after a video surfaced showing a man being kicked out of a restaurant – apparently because of his service dog. According to multiple reports, the incident happened last week at Milton’s Restaurant near King St. E. and Fairway Rd. S. Patrons at the restaurant called 9-1-1 to report an altercation between several men.

“A male had come to the restaurant with a dog that was a service dog and was requested to show his service dog licence,” Greeno said. “And at that point an altercation broke out.”

As reported by the Toronto Sun, the man with the service dog, who was wrestled to the ground by the men affiliated with the restaurant, is identified as Justin Leckie. The video recording of the altercation shows Leckie being ordered out of the restaurant for trespassing – he refuses to leave and repeatedly says that he has done nothing wrong and states that the dog is his service dog. When the argument turned physical, patrons in the restaurant could be heard telling the men to leave Leckie alone, and to stop touching him.

As reported by Global News, Leckie’s dog was wearing a reflective harness and Leckie appears to have papers in his hand to prove that the dog is a service animal. It is unclear if there was something going on other than the restaurant owner wanting the service dog out of the restaurant. The police investigation is ongoing and the authorities have asked for witnesses to contact them at 519-570-9777 ext. 8418.

Sweetest kitten with congenital facial deformity has yet to receive any adoption...
Scroll to top