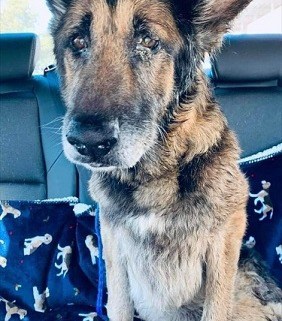 A seven-year-old German Shepherd dog named Obi never had a chance in his short life. His seven years on earth were filled with neglect, pain, suffering and a lack of a loving home. He had been brought into Miami Dade Animal Services (MDAS) as a stray in mid-March 2021. When his owner was contacted, he advised he did not want Obi back.

On March 17, 2021, Obi was evaluated by the veterinary staff at MDAS. He was in horrible shape physically.  He was severely underweight, had a pus like liquid oozing from his eyes, had an open ulcer on his hip and buttocks that went all the way to the bone. In addition to that, his paws were swollen, pus was oozing out from under his nails, and he could barely walk.

His whole body told a story of misery and neglect at the hands of the irresponsible person who owned him.

MDAS sent out a plea to rescues advising if no one stepped up for Obi, he would be euthanized to avoid further suffering.  Multiple threads went up on Facebook and pledges were made to attract a rescue.

Donna Avery, a resident of Minnesota offered to adopt Obi from Tracy.

Obi arrived at Field of Dreams on March 20, 2021, still in bad shape physically.  However, according to his vet paperwork, he was not seen at a local Oviedo vet until March 26, 2021.  Why did he have to wait so long to see a vet when he was so sickly? Any reputable, ethical vet would not deny an appointment to such a sickly dog. Why was he not taken to a Pet ER if the regular vet could not get him in? That question remains unanswered. There was plenty of money collected in pledges for his medical care.

When the transporters arrived at Field of Dreams, they were not allowed to go on the property but had to wait in their van. When Obi came out, he could barely walk to the van. Obi arrived at Donna’s home in Minnesota on March 29, 2021, at 6:30pm.  Donna fed him some boiled chicken and rice.  Obi ate well and slept a lot.

Obi was presented to him on March 30th, 2021. He was emaciated, recumbent, with swelling of both front paws with purulent drainage from the left paw. He had a very deep decubital ulcer over the right ischial bone. Blood work revealed anemia, a marked neutrophilia, and hypoalbuminemia. Radiographs showed changes in the sternum and thoracic vertebrae suggestive of bacterial or fungal infection.”

Obi was given antibiotics, intravenous fluids and feedings. He seemed to regain a bit of strength in the next 36 hours. Everyone at the vet’s office  and Donna were hopeful he would pull through. But that was not going to be the case. By Thursday evening, Obi was not eating. When the staff left Thursday night, Obi was sleeping peacefully.

When they arrived back Friday morning, Obi was dead.

The vet’s professional opinion was that Obi died of cardiopulmonary arrest secondary to profound malnutrition and serious infection of the skin and bones. His poor neglected little body had been abused and neglected for too long and did not have the reserves to respond to the treatment they started.

In an interview with Donna Avery about Obi’s death, she strongly believes that Field of Dreams Rescue did not give Obi the extensive medical and physical care he required while in their care. And, the Oviedo vet he was taken to during that time, did not take the correct course of action to help him or give him the best medical care based on his serious condition(s). They did not even do a blood test, nor did they do anything for the huge ulcerated area on his side; just sent him home with antibiotics and prednisone. Prednisone was the worst thing for him as it would suppress his already weakened immune system according to Dr. Richer.

None of the tests or treatments recommended by the MDAS vet were done nor was a note provided by Tracy’s vet stating Obi was well enough to travel to Minnesota. Nor was an interstate travel certificate provided.

So everyone involved in Obi’s care when he arrived in Oviedo failed him.

In doing some investigating through Seminole County Florida’s Animal Control’s and Sheriff’s Office records, there have been multiple complaints on Field of Dreams Rescue including operating without a license or registration, neglect of animals including dogs and horses. Some have been resolved but there is still an open case with the Seminole County Sheriff’s Office; case number 2021-CJ002726 regarding emaciated and sickly horses; one with a large tumor covering his entire eye.

Because it is still an open investigation, records will not be made public until the case is adjudicated.

According to Shari at Seminole County Animal Services she advised via email:

“I can tell you that a deputy goes to Tracy’s a couple times a month and is checking animals there.  I am not able to disclose any other information at this time.”

Many of the sheriff’s office records and animal control records state they were refused entry on to the property at Field of Dreams to follow up on complaints.  The transporters who went to pick up Obi stated the same thing.  These actions raise suspicions as to what is going on behind locked gates.

Obi’s story is nothing but tragic. This is a dog that was once a furry, wiggly, loving puppy full of life. But he fell into the wrong hands repeatedly until what was once an adorable, cuddly puppy became a worn down, almost crippled dog filled with infections and covered with injuries, broken in body and spirit, dumped like garbage;  failed again and again by the people who were supposed to care for him.  His one chance at a good life was in the care of Donna Avery but that dream was dashed.

Rest in peace Obi and fly free.  The only thing we can do for you now is to get your story out, so everyone knows that a dog named Obi once walked the earth and was failed by many. Your life mattered.

Before using, adopting from, or sending money to any animal rescue, do your homework, look up all public records on them from the local animal control office and humane society to the local police or sheriff.

If you make a complaint about abuse or neglect of animals and local authorities do not act, go beyond them to the following agencies.

We are their voice.

Senior dog disappeared a decade ago, he was recently abandoned, then reunited...
Scroll to top