You are here: Home1 / News2 / animal cruelty3 / Man arrested and charged for throwing dog to the ground and breaking his... 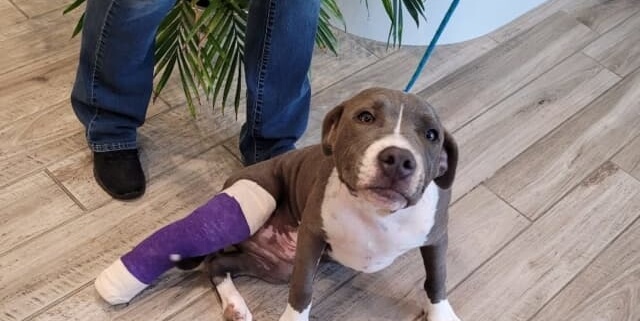 A man in Long Island, New York, was arrested and charged after throwing his dog, Rocky, to the ground and breaking the pup’s leg. As reported by the Daily Voice, 44-year-old Jose Martinez-Vasquez is facing charges of animal cruelty and making a false statement, as a result of the violent incident which allegedly took place on August 9.

The Suffolk County SPCA issued a release about the cruelty investigation:

Roy Gross, Chief of the Suffolk County SPCA, says that on August 12, 2021 the Babylon Animal Shelter reported to the Suffolk County SPCA that a stray dog in their care appeared to have been abused.
On August 16, 2021, after an investigation which involved reviewing surveillance video and interviewing possible witnesses, SPCA detectives charged Jose Martinez-Vasquez, 44, of Wyandanch with cruelty to animals.

According to the release, a surveillance video showed Marinez-Vasquez picking Rocky up and “and forcibly slamming him to the ground, causing the dog to suffer a broken leg.”

Martinez-Vasquez was also subsequently charged with filing a false statement after it was determined that he lied in a written statement given to investigators.
Martinez-Vasquez is scheduled to appear in First District Court, Central Islip, NY on September 3, 2021.