You are here: Home1 / News2 / Dogs3 / dog news4 / Litter of puppies, taped in plastic tote, thrown off of a bridge

A litter of puppies was placed in a plastic tote, which was taped close, and the tote was tossed from a bridge in Logan County, Oklahoma; one puppy did not survive the fall. 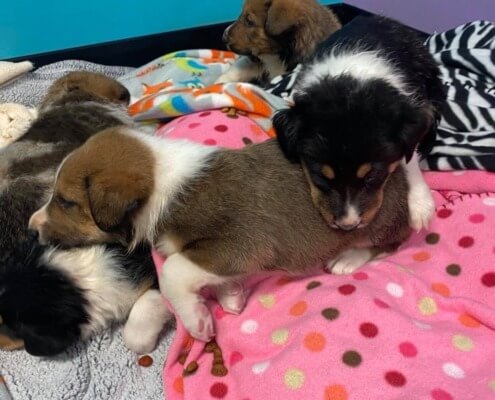 Earlier this month, On July 18, The Bella SPCA posted images of the tote, and the puppies inside, explaining what is believed to have happened:

Yesterday afternoon we were contacted after 8 five-week-old puppies were found below a bridge near South Westminster and Triplett Road in Logan County, OK. The people who found the puppies described the scene and it is clear the puppies were thrown over the bridge while inside a plastic container that was strapped/taped shut. We can only assume whoever did this thought the container would land in the water but instead the container hit the bank and broke open. Sadly, one of the eight puppies did not survive the fall.

The team at Bella SPCA Rescue Center examined the puppies last night for injuries, bathed them to remove the mud, treated them for fleas/ticks (they were covered with both), and gave them some good food to eat. Shortly after all that was done, we had seven new snoring puppies at our center. Today they are all bright, alert, and doing what puppies do. After a visit to our vet team Bella SPCA Non-Profit Veterinary Hospital, these little guys and gals will stay at either our rescue center or in a foster home for the next 3-4 weeks and when they’re old enough, start a new life with a new family.

A subsequent update indicates that the puppies are doing well:

Last “Lucky Seven” update for the day. After a series of exams from the team at Bella SPCA Non-Profit Veterinary Hospital, we now know a handful of the puppies have some injuries from the fall. One of the puppies has a fractured leg and two others have minor injuries causing bleeding in their eyes.

Thankfully, because they are so young and healthy our vet team is confident with time, rest, and good care, all of them will make full recoveries and not have any long-lasting health problems.

Anyone with information about this incident is asked to contact The Bella Foundation at info@bellaspca.org.

Yellow Lab rescued from hot car who suffered a stroke has miraculous story to...

Precious Pearl at 14-years-old picked up as stray waiting at high kill shelter...
Scroll to top