You are here: Home1 / News2 / Dogs3 / dog abuse4 / Bruno died a torturous death due to negligent adoption practices at Ohio... 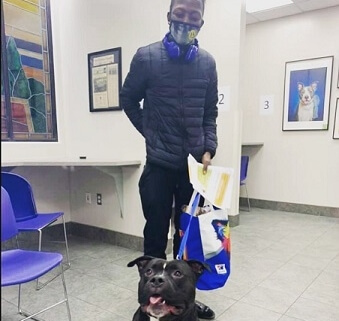 A dog named Bruno died a slow and torturous death at the hands of his adopter due to a very lax and negligent adoption policy at the Franklin County Dog Shelter in Columbus, Ohio. The shelter signed Bruno over to adopter Isaiah LaChristopher Rush on March 21, 2021, with no background check and no questions asked.

Franklin County Dog Shelter’s director Kaye Persinger has recently done away with any kind of background checks, screening, landlord checks or follow-ups after adoption.   The result of this lackadaisical handling of adoptions led to Bruno’s death within three months of his adoption. Bruno’s adopter Isaiah Rush kept the poor dog outside 24/7 in a small crate with a tarp over it.  Bruno suffered day in and day out in extreme heat with no water until he died of heatstroke.

Rush then tossed Bruno in the dumpster like a piece of garbage.

If Franklin County had done their homework, they would have seen that Isaiah LaChristopher Rush, date of birth 10/17/1998, had a lengthy arrest record for crimes of violence including assault and domestic violence.

On March 22, 2021, the day after Bruno went home with Isaiah, his previous landlord reached out to Franklin County warning them that Rush was a dangerous and violent man who had abused another dog prior to adopting Bruno. According to a message from the landlord to Andrew Kohn, Communications Relations Manager for Franklin County Dog Shelter, she expressed hope that the shelter was doing a renter’s check before allowing Isaiah to take Bruno.

The previous landlord described in detail how in August -September of 2020 Isaiah owned another dog which he kept locked up in a very small storage space on his balcony. The landlord had to have maintenance break down the door to free the dog. When Rush was confronted about the dog, he stated he didn’t want the dog anymore, so he let the dog roam the streets for several days.

The landlord stated to Franklin County that she is “sickened” over Isaiah Rush now having Bruno. According to her, his intentional abuse of the previous dog is what cost him an eviction.

Andrew Kohn assured the landlord they would investigate it. This was never done; another blank promise from management/staff at Franklin County Dog Shelter. And an opportunity to save Bruno had been completely ignored.

Dwayne Young, assistant director  to Kaye Persinger told the landlord he would go and get Bruno back from Rush. He never did. If Dwayne had kept his word and went out to Rush’s home, he would have seen Bruno living in deplorable conditions inside a tiny crate. Instead, he chose to ignore it, leaving Bruno in a deadly and dangerous situation.

Neighbors of Isaiah Rush also called Columbus Humane  four days before Bruno died, telling them to please come check on Bruno’s condition. Due to the intense heat and no access to water, they were extremely worried about his wellbeing. Columbus Humane, never showed up. Again, an opportunity to save Bruno’s life was completely disregarded by those paid to act on such complaints. They were too lazy to leave their air-conditioned offices to follow up on a complaint about a dying dog.

If Andrew Kohn, Dwayne Young, or Columbus Humane acted on all the complaints, Bruno would be alive today, and Isaiah Rush would be where he belongs, in jail.

Bruno was left outside from the day he was adopted in March until the end of June when he died of heatstroke. The temperature reached 100 degrees that day.  He was intentionally left in the crate with no water. Being a black dog, he absorbed more heat. This poor boy never stood a chance. When Isaiah found Bruno dead, he called Franklin County Dog Shelter and asked them to come and pick up the dead body.  Franklin County said they do not pick up dead dogs and advised Isaiah to either cremate the body or throw it in the trash which he did.

Bruno’s body was subsequently picked up by wardens and returned to the Franklin County Dog Shelter.

On July 7, Columbus Humane made a statement to the local news  NBC4 stating a necropsy was being done to determine the cause of Bruno’s death and they were waiting for the results.

On July 22, Columbus Humane released this public statement on Facebook:

“Columbus Humane would like to provide an update on an animal cruelty case regarding the dog Bruno, adopted from our partners at the Franklin County Dog Shelter. After a thorough investigation of the facts and evidence, we submitted a summary of our findings to the City Prosecutor’s Office for a complete review. Our agencies both agree that we lack probable cause to charge the suspect with a violation of O.R.C. 959.13 or O.R.C. 959.131. As a result, the case is now closed.

We understand that our community is grieving the loss of a beloved pet and we support you. Enforcing the laws to protect animals and people is a role that we at Columbus Humane take very seriously. Our promise to you, our neighbors, is to respond objectively and thoroughly, with skill and great compassion. Thank you for caring deeply and advocating for the animals.“

How can they say that in good conscience?  He was intentionally locked in a crate for three months; day in and day out in 90–100-degree heat with no water. What more evidence do they need?

The people in charge of making sure Bruno was safe failed him in life by not responding to warnings about his safety, and now they are failing him in death by not holding anyone accountable for his death.

Their callous and self -serving lack of action in Bruno’s case is nothing more than self-preservation to protect their own agencies and jobs. This attitude is what enables monsters like Isaiah Rush and others like him to murder helpless animals again and again.

Rush had already tortured a dog prior to Bruno. This was well known by Franklin County.  He is a habitual animal abuser/ killer who should never be allowed to adopt another animal ever again.

Bruno’s story is not only tragic but poignant. He was a dog who was in and out of the shelter system since April 2019. He was adopted and returned numerous times. His final stay at Franklin County Dog Shelter lasted 172 days.

According to the volunteer staff at Franklin County, Bruno was an amazing dog who loved everyone, and everyone loved him.  Although he was a favorite, he started to grow tired of the kennel life.  All he wanted was a couch and a bed to snuggle up with his person and be loved and treated like he mattered. Instead, he got a life of being dumped again and again, tortured, and murdered.

Lucky Bruno got one lucky break from the kennel to attend a Christmas sleepover at a family’s home.  The video shows Bruno playing with his toys, snuggling on a big, soft dog bed. He also loved riding in a car and looking out the window. He was a big “goofball” that tolerated a lot without ever growling.

Watch his Christmas visit video here .That was probably the happiest time in Bruno’s short life.

We can only imagine what was going through Bruno’s mind during those long torturous days and nights as he languished in his crate slowly dying. Did he wonder “Why won’t someone save me? Why won’t they take me back to the place where everyone loves me? Where I have water and food and the air in my kennel is cool and comfortable.”

Maybe as Bruno felt his life ebbing away on that last day in June, feeling hopeless and knowing this was the end and no one was going to come for him, his last memories were of his Christmas sleepover; the happiest time he had ever known.

Bruno is now dead, yet Isaiah LaChristopher Rush continues to walk the streets freely as if he never caused the death of two helpless dogs. And Kaye Persinger, Dwayne Young and Andrew Kohn still sit on their thrones at Franklin County Dog Shelter secure in their positions of authority, completely oblivious to the damage they caused and the death(s) that is forever on their hands.

Each day to them is just another day to send more dogs off to be killed by society’s derelicts.

But this is far from over. There is nationwide outrage over Bruno’s death.  There will be justice for Bruno.

A peaceful protest was held near the Franklin County Dog Shelter on Saturday July 18, 2021.  Watch the video here

Protesters are demanding that Isaiah Rush be charged with Bruno’s death and Kaye Persinger and Andrew Kohn be removed from their positions. Also, protesters demand the adoption and screening process at Franklin County Dog Shelter be drastically changed to include more thorough vetting of adopters.

Unless these demands are met, the lives of countless dogs are destined to be lost.

To speak out for Bruno and demand Isaiah Rush be charged with his death, contact:

Also, email the commissioners with your concerns about how the shelter is being run.  Too many dogs are dying at the hands Kaye Persinger, Andrew Kohn and Dwayne Young.

The greatness of a nation and its moral progress can be judged by the way its animals are treated.”

We are far from achieving greatness as a nation until our animals are treated with more respect, compassion, and dignity. Until that happens, we will not be fully “woke.” 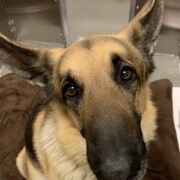 Couple used Rover app to watch their dog for the weekend: Pup got lost and hit...