Dozens of dogs and puppies, some alive, some dead, have been removed from a dilapidated single-wide trailer in Shadyside, Ohio. According to multiple sources, the dogs were living in squalor, with no access to food, water, or fresh air. The rescue was a coordinated effort among several agencies. The Belmont County Animal Rescue League explains what went into the large-scale rescue:

BCARL was assisted by many local and outside agencies: ASPCA, Belmont County Sheriff’s Office, Shadyside Police Department, Spirit of 76 Volunteer Fire Department, Pultney Township Trustee Frank Shaffer, Belmont County Health Department Rich Lucas, Belmont County Adult Protective Services, and New Life Fellowship Church. The ASPCA were professional, thorough, and they were prepared beyond belief. The Spirit of 76 was extremely helpful. Their crew stayed all day so the team at the scene could cool off in their ambulances and they helped transport animals from the scene to the shuttles. 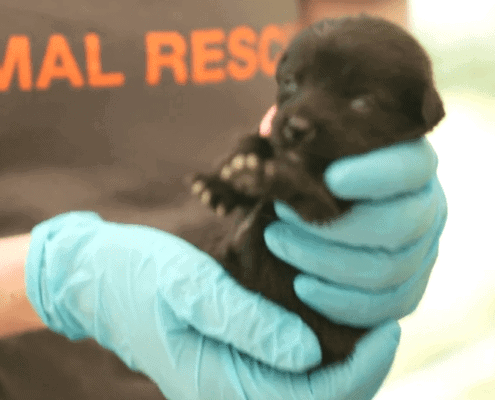 As reported by WTRF News, the dogs were suffering from a slew of maladies, including eye infections, puncture wounds, and scars. Some of the dogs and puppies required emergency care. The ASPCA outlined what was discovered during the seizure:

They were crowded together in a small room. The dilapidated trailer was not safe for any person or animal to be in. The sunlight was shut out, and there was no ventilation—the odor was overwhelming with dangerous levels of ammonia. More than 90 dogs—including puppies—were living in these dangerous and neglectful circumstances when we arrived to help.
Many of the dogs were found with untreated medical conditions, some appeared to have open wounds, and many were extremely fearful.

The Belmont County Animal Rescue League is struggling under the sudden influx of dogs. You can make a donation at this link to their website.

Donations to the ASPCA can be made here.

The name of the dogs’ owner has not been released.

Stressed puppy unable to adapt to shelter life with no one to help him slated...

Investigation after multiple dogs die in ‘freak accident’ at dog...
Scroll to top