You are here: Home1 / News2 / animal cruelty3 / Woman who abandoned elderly, blind and deaf dog in parking lot to be s... 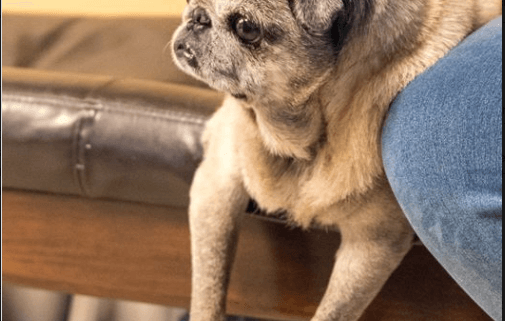 An Ohio woman who abandoned her elderly, blind and deaf dog, will soon be sentenced for her crime. As reported by News 5 Cleveland, the 52-year-old woman who left the pug, named Agnes, in a Wadsworth Walmart parking lot, is scheduled for sentencing on January 30.

The senior pug, 15 years of age, was abandoned in the retail store’s parking lot on November 30. The dog was taken in by the Medina County SPCA and she has since been adopted by her foster family.

The animal shelter updated Facebook fans about the rescued dog in early January:

Look who stopped by the shelter today to visit – it’s Agnes! You may remember her as “the elderly Pug left in a box in the Walmart parking lot”… Well, now she’s “the elderly Pug in a loving home and part of a family”!

Agnes’ owner reports that she’s doing well! She has her own “safe zone” in the house (because she’s deaf and blind) where she knows where everything is and is at no risk for tripping over or bumping into anything.

(And also because she’s such a good eater, she would eat all the other animals’ food, given the chance! The old girl’s nose still works VERY well!) She does require daily medication and a fair amount of care, so we’re VERY glad that she landed in such a wonderful, loving home!

The woman’s decision to abandoned her old dog has resulted in a charge which could result in a fine and up to 90 days behind bars.

Yesterday: Woman loses job after being caught dragging a dog behind a scooter – the story here.

In need: Elderly dogs homeless – owner no longer wanted the responsibility. How you can help here.