A Utah woman was arrested and is facing a felony charge for allegedly disfiguring her puppy, who she was trying to keep quiet. As reported by Fox 13 News, the pup, Shadow, suffered serious facial damage after her owner secured a hairband around the snout to keep her from barking while she slept.

The woman accused of hurting Shadow is identified as Alexis Callen of Murray. Dan Eatchel, manager of West Jordan Animal Services, told the news agency, “The owner did admit to putting a hair tie on the puppy.”

Shadow is under the care of the Celestial Zoo rescue organization, which is helping the pup secure the veterinary care that she requires to recover. The rescue agency has stated that veterinary staff believe that little Shadow had the hair tie around her snout for one to two weeks…not the 48 hours which Callen admitted to.

The cruel situation was brought to light after Callen posted on social media that she needed to rehome her puppy because she was injured and couldn’t afford veterinary care. 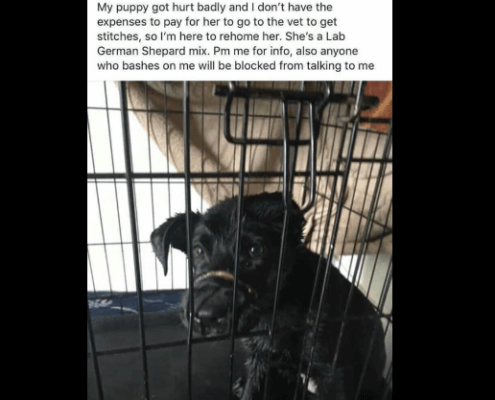 Shadow needs expensive reconstructive surgery to repair the damage to her tissues. The rescue group is working to raise the funds to make this possible. You can donate to the organization at this link to their website, or directly to Blue Pearl Pet Hospital in Midvale at 801-871-0600 (Please let them know it is for Celestial Zoo/Shadow).

Callen was arrested and she is facing a felony charge of torture of a companion animal.

Animal control officer alleged to have killed woman’s dog without her...
Scroll to top