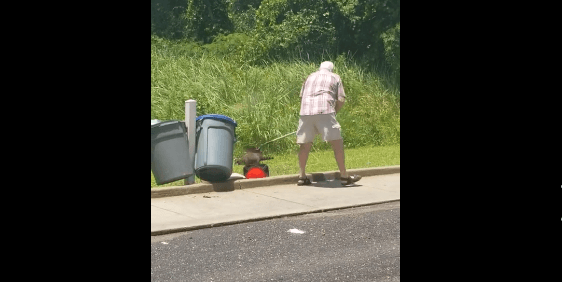 There is growing outrage after the release of a video which shows an Alabama town mayor striking and possibly killing a raccoon with a shovel. As reported by WKRG News, Jim Staff, the mayor of Atmore, was captured on video on Sunday hitting a raccoon near a boat launch in Gulf Shores. Staff claims that the raccoon was behaving oddly, and that he feared the animal was rabid, but a woman familiar with the raccoon tells a different story.

The individual who recorded the video tells the news agency that the raccoon was known to hang out near the Canal public boat launch, and that it was likely looking for a food handout. She said, “I told him over and over again that raccoon is there all the time.”

The video has been shared thousands of times on social media with most people calling for justice for the raccoon. But Staff is defending his actions – a statement sent to the news agency explains that this video shows him, “putting the raccoon out of its misery” after it approached him. He added, “The bottom line is I had every right to fear and act accordingly when a wild animal ran first at my wife and then me. The video and comments posted on Facebook are both misleading and irresponsible because they don’t give the entire picture of what happened.”

The woman who posted the video on Facebook writes:

Dog and a friendly dolphin