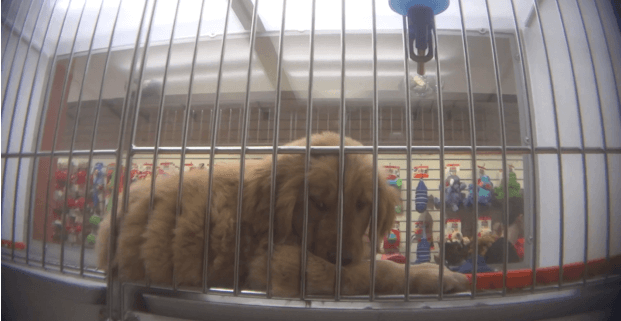 The undercover video shows dead puppies in black bags, and horribly sick puppies who are not receiving any type of veterinary care. Store employees can be heard explaining that ailing puppies seldom receive veterinary care, and most die even if they do go to a veterinarian. The puppies typically arrive to the stores in poor condition from breeders who place little to no value on the dogs which they “produce” for profit.

a brown Chihuahua named Jade started having seizures, but wasn’t taken to a veterinary hospital for almost a week. When she finally went to a veterinary hospital, she was unable to recover and was euthanized. A Petland staff member told the investigator that the store’s owner rarely took sick puppies for care, stating: “He doesn’t want to pay that extra money.”

And the discovery of purposeful withholding of information to consumers about fatal illnesses:

Our investigators also found a deliberate attempt to keep consumers in the dark about contagious diseases that can be deadly for puppies, like parvovirus. When the Sarasota store was notified by a customer that a puppy recently bought there was diagnosed with parvovirus, staff members frantically cleaned the store. But the store didn’t reveal the risk to other consumers and continued to sell puppies that may have been exposed to the disease.

Despite repeated warnings about the inhumane conditions at many (if not most) pet stores, and the horrors of the puppy mills which produce puppies to supply these stores, consumers continue to dole out hundreds, sometimes thousands, of dollars to obtain a “purebred” pet store puppy.

Read the full report about this investigation below:

Woman arrested for leaving friend’s muzzled dog in hot car while she ...