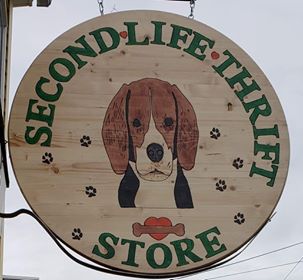 Tourists and locals of South Berwick, Maine will come across a quaint thrift store at 439 Main Street. The sign reads “Second Life Thrift Store” and features the smiling face of a dog. This is no ordinary thrift store supplying secondhand goods at affordable prices, but a store whose profits go to help rescue and shelter animals.

Cara Kopec opened the store in October 2017 and to date it has been quite successful. Cara got the idea for the store after doing multiple garage sales as fundraisers for her friend who opened a cat rescue called Furr. The sales brought in a substantial amount of money for the cat rescue. This inspired Cara to open the thrift store as a means to generate funds for 501(c ) 3 rescues.

Cara is able to donate the monies from the store to the rescues because she also works two other jobs. She owns a housecleaning business and another small store. When a nearby property came available, she acquired the building for the thrift store. According to Cara, her cleaning business pays for the store, and her other shop pays for the electricity. She also gets many donated items and finds other merchandise for free on Craig’s List and Facebook so the shop is able to sustain itself.

The store is appropriately named “Second Life Thrift Store.” Not only is it a second life for the clothing and other objects that fill the store, but also a second chance at life for shelter pets whose lives are saved through the rescues who take them in or pull them from high kill shelters.

The store also has a pet food pantry for people unable to afford food for their companion animals. The food is supplied to the store by personal donations. Recipients of the food are not asked any questions other than how many animals do you have and what do you need.

Cara has stated “I don’t want anyone to lose their pets because they cannot feed them.”

Second Life Thrift Store has a few employees and volunteers who keep the day to day operation going.
There are also three dogs, two cats, and two bunnies, all rescue animals from New York City that live in the store. One of the main recipients of the store’s profits is Dog4U, a very active rescue in South Carolina that pulls countless animals from overcrowded southern high kill shelters and sends them to their rescue partners in the northeast.

Demographically and statistically, the southern states have a higher homeless pet population than the northeastern part of the United States. In the first year, Second Life Thrift Store made $9000.00 They have surpassed that this year. This means, more help for Dog4U and other animals in need.

It’s refreshing to see, in this current “me generation,” where everyone is out to hustle a buck for themselves, there are still selfless, generous people like Cara Kopec working to make life easier for others. 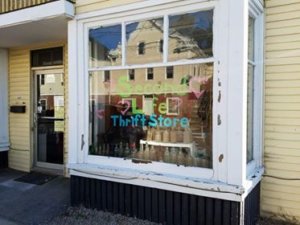 The store at 439 Main Street

Your purchase helps support the continuation of our site. More styles and messages at our store. Please click here to find them all!
Jealous much?!

Family moved, leaving three bonded dogs at shelter – will anyone give...