You are here: Home1 / News2 / Dogs3 / dog abuse4 / Texas under scrutiny for returning dogs back to abusive owners 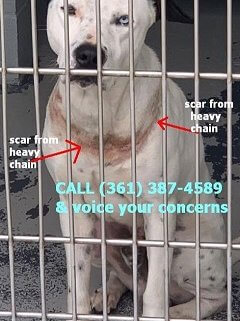 Texas has been under negative scrutiny within the past two weeks due to two cases of dogs being returned to abusive owners; one with tragic results.

The first dog in Robstown, Texas had obvious scarring and injuries caused by living his life on the end of a heavy chain.  There were deep scars on his neck and chest, and when he ended up at the Robstown City Animal Control, he was dragging a heavy chain behind him. A Facebook networking group known as Coastal Bend Animals heard of the dog and knew, although he had escaped a life of misery, he was now in a high kill, overcrowded shelter and facing new dangers.

They posted him on their page and shared him with multiple animal rescues begging for someone to come forward and rescue him.  People also pledged toward a reputable rescue and finally, their pleas were answered. A rescue tagged him!

Unfortunately, this dog was not destined to have a happy ending or go to a better home environment. Instead, Robstown City Animal Control returned him back to his owner, back to a life of being ignored and having to carry the weight of a heavy chain on his neck with no relief. The dog’s owners were never cited for abuse nor did they suffer any consequences for inflicting pain on their dog.

You have to wonder what kind of mind set would think it’s okay to return a dog back to a horrific life when a rescue was interested in helping him? Now this dog will never get relief from his misery when those who were supposed to help him, failed in their obligations.

“……promoting responsible pet ownership and humane treatment of all animals……”

You can voice your concern for this situation by calling the Robstown City Animal Control at 361-387-4589.

Another similar case occurred in Lamar County, Texas and resulted in the death of the dog once he was returned to his owners. This sad and tragic story began on February 8, 2019 when a Good Samaritan named Kristi Pomeroy discovered a dog lying in a frozen puddle on someone’s property. It was apparent he had been there for several days. The temperature was 17 degrees, and the poor animal had icicles hanging from his body.

After discovering the dog, she called the Lamar County Sheriff’s Office and Deputy Whitsell responded. Although the dog was in horrible condition, emaciated, with one side of his face swollen, and had been lying in a puddle for several days, Deputy Whitsell did not take him to a safe haven to get medical help or to be put down humanely. 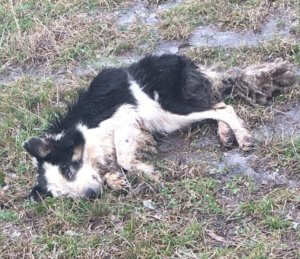 Pomroy begged the deputy to allow her to take the dog to her vet, but he refused saying he had to take the dog back to its owner so he could file criminal charges against them. He further stated he needed to get a court order to remove the dog from the property.

Deputy Whitsell took the already suffering dog back to his owners who then decided to shoot the dog as their way of “putting the dog down.” According to Kristi Pomroy, the Lamar County Sheriff’s Office has swept the whole thing under the carpet.

No charges have been filed against the owners of the dog although, according to Section 42.09 and 42.092 of the Texas Penal Code, “Cruelty of Non-Livestock Animals” and “Cruelty to Livestock Animals,” prohibits a person from intentionally, knowingly or recklessly cruelly treating an animal.

Kristi has gone public with this case through social media. She wants justice for this dog and encourages everyone to call the Lamar County Sheriff’s Office at 903-737-2400 to demand a full investigation and justice. It’s disappointing that those who take oaths to serve and protect would take that oath so lightly.

Citizens of Robstown City and Lamar County Texas should be ashamed and outraged that their government condones such mistreatment of animals.
The Pet Rescue Report endorses HempMy Pet – CBD products for pets