You are here: Home1 / News2 / animal cruelty3 / Teen accused of abandoning puppy who lost legs after being hit by a tr... 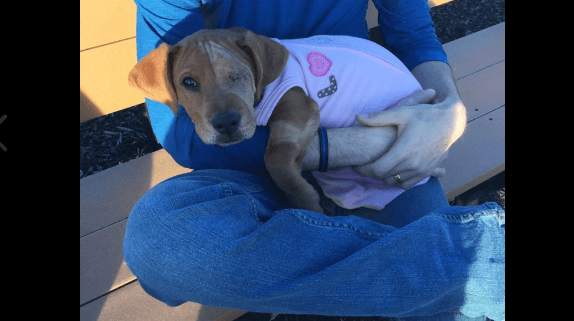 A teen is accused of abandoning a puppy who was hit by a train in Hamilton, Ohio. As reported by WHIO News, the authorities have identified a 17-year-old teenage boy as the person who abandoned the three-month-old pup, dubbed Trooper, on March 13.

Trooper was struck by a train on the same day that he was abandoned – he lost both of his rear legs because of the impact. Butler County Sheriff Richard K. Jones told the news agency,

“If the juvenile would have just taken the dogs to the shelter, Trooper may not be injured today. I am sure Trooper will find a great forever home but his limited quality of life could have been prevented if this individual made a better decision.”

A second puppy, also abandoned by the teen, was later located in Fairfield.

Trooper is being cared for by Animal Friends Humane. The most recent Facebook post about the puppy indicates that he is healing from his injuries and that he will soon be in his own wheelchair.

He is becoming more active and playful with each passing day. His next vet appointment is this Thursday and it’s a BIG ONE! His sutures will come out and he will be fitted into his wheelchair and begin physical therapy. We’re so excited for Trooper! Stay tuned for more from Trooper this week!

Because he is a minor, the authorities are not identifying the teen accused of abandoning the puppy. The teen is facing misdemeanor charges for cruelty and abandoning animals.

The authorities are not disclosing the identity of the teenager because of his age.