Update: After the publication of this article, the rescue group announced that Romeo’s owner would be surrendering her pup out of fear for his safety. The neighbor of the attacking dogs has been cited, but the dogs are being allowed to stay on the property.

A German shepherd pup, just five months of age, was nearly killed when he was attacked by a neighbor’s two aggressive dogs. Shenandoah Shepherd Rescue (SSR) jumped into action when they received the call about a severely injured puppy who was fighting for his life.

The rescue group’s initial post about the pup reads:

Bandit is a case that we had no time to prepare for. No time to gauge your interest in saving him. His situation so critical, we had to jump into immediate action.

Bandit was brutally attacked by another dog earlier this evening, leaving one of his jugular veins severed and the muscle on the left side of his neck almost completely unattached.

The critically injured puppy made it through surgery and more information has come to light about what happened on the day that he nearly lost his life. The rescue agency explained what is now known:

SSR became involved in this case because Bandit/Romeo was incorrectly identified as a stray, which has complicated the situation. We’ve spoken with the owner and gained a few more details about the situation.

Apparently the puppy was let out into a fenced yard while his owner was away for several hours – during that period of time, the neighbor’s dogs, who are described as “aggressive,” accessed him. The group writes:

All we know is his owner left him outside alone from 1-4 pm… and an attack in her neighborhood occurred at 2 pm. She reportedly lives next to two very aggressive dogs who constantly try to get into her yard. We can only speculate that they succeeded in getting into Romeo’s yard and that the aggressive dogs’ owner possibly reported him as a stray to avoid punishment.

There was a great deal of initial concern because the puppy appeared to be emaciated. The rescue group has confirmed that his owner has taken her puppy to a veterinarian for all vetting and has sought help for his weight. The rescue explains:

We have confirmed records that the owner has been taking him to the vet to determine why he is so thin. Much to our surprise, Romeo is fully vetted, neutered and on preventatives. He is clearly loved and cared for, despite what happened yesterday.

The shepherd puppy’s owner is said to be “distraught,” and the rescue group is doing its utmost to support her, and her puppy, during this difficult time. 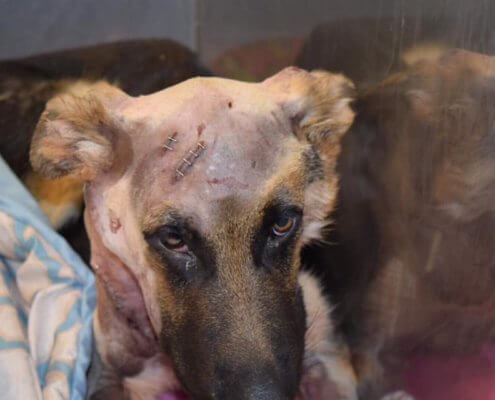 Yesterday: Family’s cow had to be euthanized after being kicked with steel-toed boots

Adorable young dog, and her stuffie, are in need of a loving family

Death row dog one of the worst cases of neglect Georgia rescue has ever see...
Scroll to top