In Lawton, Oklahoma, a longhorn steer that escaped the slaughterhouse on Wednesday, has a sad ending. Rusty, a 700-pound brown and white steer, had been on the run for more than 24 hours, but was captured on Thursday afternoon.

According to Channel 7News, Rusty had arrived at the meat processing plant the night before he was slated to be slaughtered. The steer managed to squeeze through an opening and run for his life. Cowboys rounded up the friendly animal nearby. Animal advocates had hoped Rusty’s life could be spared – after all he had the right idea to get out of there fast.

“We’re just hoping that because he’s running for his life, that someone will spare his life and he will come live out his life here,” stated Susie Coston, National Shelter Director of Farm Sanctuary.

Sadly, that was not be be. Rusty’s owner, Brian Reavis planned to have the steer processed that same day. The farm owner raises longhorns, and this is a source of food for his family for an entire year. Reavis stated it takes two years to raise the steers; there are no growth hormones or steroids used.

We are sorry Rusty. Rest in peace big guy.

Just a cat and a dog…taking a shower 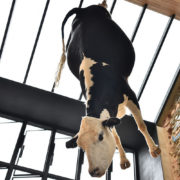